5 Best Cities to Live in Close to Portland: 2021 Update 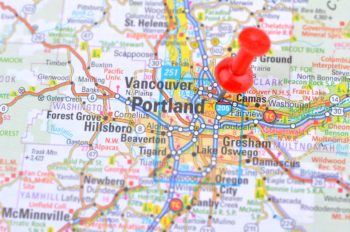 While the market for homes in Portland is seeing high demand, the suburbs are even hotter. After a year of pandemic living, the space offered by suburbs and small cities close to Portland only gets more appealing. Flight to the suburbs has been particularly strong in dense (and expensive) areas like New York City and San Francisco. Here in Portland, we may not have experienced as drastic a shift. But the suburbs surrounding the metro area are still booming – and they have a lot to offer when it comes to quality of life.

Intrigued? If you’re interested in a more suburban lifestyle, you’re in luck. The Portland area boasts some of the most charming suburban areas you can find. Your move away will look like more than strip malls filled with chain stores. In some cases though, Portland’s penchant for preferring local spots and unique quirks does extend beyond the city boundaries. In that spirit, we’ve gathered up five of the best cities with small town charm (but still close to the big city). Check them out; you might just find the perfect spot for your next move!

Just south of Portland, at the intersection of I-5 and I-205, sits a little town named Tualatin. Filled with parks and steeped in a proud rural history, Tualatin is like a little hamlet from the past. Yet there’s more to this town than meets the eye. Its citizens and government are committed to the arts, for one. Don’t miss the gorgeous community mural, designed by local artists Redstone Rodolfo Serna and Carlos Chavez. And the town is a stop on Washington County’s Quilt Barn Trail, celebrating both the arts and rural heritage.

But one of the downright coolest things to see in Tualatin has to be the gloriously named Pumpkin Regatta. Once a year, citizens paddle inside giant, hollowed out pumpkins – yes, you read that correctly – down the Lake of the Commons. These “wacky races” draw in thousands of visitors every year, and we can see why. Who doesn’t want to watch a bunch of crazy Oregonians floating in 1,000 pound pumpkins?

The county seat of Clackamas County, Oregon City has grown to be one of the up-and-coming suburbs of Portland. Situated at the confluence of the Willamette and Clackamas Rivers, it was once considered to be the end of the Oregon Trail. The city’s devoted a fantastic museum to this history, complete with costumed tours.

Oregon City is home to a thriving downtown full of local shops. But if you’re also in search of natural beauty, you won’t be disappointed. Residents of Oregon City are active; they love boating and kayaking on the surrounding rivers. And Oregon City government has been partnering with other local governments and the Confederated Tribes of Grand Ronde to revitalize Willamette Falls – the second most powerful waterfall in the U.S.

We aren’t the only ones excited about Oregon City though – home prices are up from last year. You might want to jump on this opportunity sooner rather than later!

Clocking in as the farthest destination from Portland, we have Forest Grove. For anyone looking to be relatively close to the Portland but feel like their still in a separate town altogether, this is the spot for you. Their city website describes the town as having a “traditional village feel,” and we have to agree. They also self-identify as living life at an “unhurried, leisurely pace.” Sounds pretty idyllic, right?

Possibly Forest Grove’s claim to fame is Pacific University, a private college with solid credentials and a long history. If you like the feel of a college town, slightly sleepy but in a charming way, this city fits the bill. Rub elbows with the academic types, or take a trip out to Hagg Lake for some fishing. You really can have it all.

#4 – Hillsboro – Organized and Ready for Growth

Prefer being a little closer to the action? Hillsboro makes a great alternative. You can think of it as Beaverton’s younger sibling. You’re solidly placed in the Silicon Forest, along with all its job opportunities. But it’s a less dense community than Beaverton with its own identity, and its own plans.

For one thing, Hillsboro is on top of their future. Their Hillsboro 2035 Community Plan lays out exactly what they expect to do to increase livability and sustainability. Solid plans like this mean that the community is invested in itself. Hillsboro has an excellent school system, and only has plans to improve it. They want to be more environmentally friendly (than they already are). They want their residents to have access to public services and public transportation. If you’re looking for a town that is organized, this is the one to beat.

Finally, let’s finish with possibly the best named place in all of Oregon. But don’t let the name fool you. This town has some fun stuff going on, and they have a good sense of humor about themselves. For example, their sister city is Dull, in Scotland. Or take their motto: “Boring: An Exciting Place to Live & Work!”

Boring is by far the smallest in population on our list, making it a great choice for anyone really searching out a small town feel. But still close to the city; think of it as the gateway to the forests and hills of the Cascades. In fact, the Springwater Trail connects Boring to Portland, for any cyclists out there.

While technically an unincorporated area, Boring is still organized and has regular meetings of its Community Planning Organization. It also hosts a community theater (when we aren’t in a pandemic) and is known for its nurseries, which serve the nation with fresh plants every year.

Ready for Your Move Away from Portland?

Do any of these cities appeal to you? If so, great! If not, don’t worry. This is only one short list featuring five cities among the many suburbs in the metro area. Finding the perfect fit for you may take time. But we’re here to help you along your journey! Whether you’re ready to jump on a property in one of these cities, or have no idea where you’re headed next, our top 1% buyers agents are ready to guide you to the best fit for you.

How Big Should Your Next Home Be?