5 Best Cities to Live in Close to Portland: 2022 Update 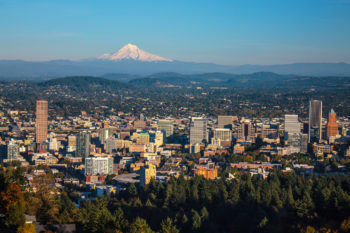 Across the country, pandemic life has driven people from city centers to smaller locales in search of more space, more privacy, and a quieter, more enriching quality of life. While not to the degree of more populous areas like New York, and the Bay Area, many Portland residents have also made the shift toward suburbia.

Think the suburban lifestyle might be for you? Read on. We looked at the many desirable and highly livable cities and towns surrounding Portland, many of which offer the serenity so many are looking for these days, while still being infused with a little bit of Portland. Here are our top five picks.

Tualatin is located at the I-5 / I-205 intersection, just south of Portland in the northwest corner of Washington county (and part of Clackamas county). The translation of Tualatin’s name might give a certain impression about this seemingly unassuming little city. It’s namesake is the nearby slow-moving river, which comes from the Atfalati (the region’s Native American tribe) and means “lazy” or “sluggish.” We like to think of it as “peaceful” and “serene.”

With its many parks and green spaces, along with its palpable historic vibe and commitment to the arts, Tualatin promises a charming and diverse quality of life. From its thoughtfully designed (by local artists Redstone Rodolfo Serna and Carlos Chavez) and executed community mural to its contributions to the county’s Quilt Barn Trail, Tualatin is all about celebrating both the arts and its rural heritage.

Annually, Tualatin residents paddle down the Lake at the Commons in giant, hollowed out pumpkins for what’s called the Pumpkin Regatta. What can we say? “Weird” doesn’t only belong to Portland! Every year, thousands of visitors head to watch the spectacle of wacky Oregonians race in 1,000-pound pumpkins.

Nature lovers don’t have to look far in Tualatin for their outdoor fix. Between the numerous parks, green areas, golf courses, and waterways, finding solace from the daily grind is mere minutes away. A few standouts are The Tualatin River and the Tualatin River Water Trail, Tualatin Lake at the Commons, Little Woodrose Nature Park, Cook Park, Tualatin Island Greens, and Tualatin Country Club.

Oregon City sits between the Willamette River, running north-south along the city’s western edge, and the Clackamas River, an offshoot of the Willamette, running across the city’s northern boundary. Serving as the county seat for Clackamas County, the Oregon City’s river borders contribute to its abundance of farmland and natural beauty that provide residents such a high quality of life.

For example, Carver Park is located on the Clackamas River, just 20 minutes from downtown, and provides activities like boating, fishing, swimming, kayaking, birding, and rock collecting. You can also tent and RV camp along the Clackamas, take a hike on the eight-mile Clackamas River Trail, or head out on a guided raft trip. Drive the scenic byway and take in spectacular views of old-growth Doug firs, salmon, bald eagles, and rare birds.

Oregon City is rich in history, too. The banks of the Clackamas were once a Native American settlement. In 2019, the Grand Ronde Tribe purchased the defunct Blue Heron Mill in Oregon City for the sole purpose of restoring the land on which it’s built. A ceremony in 2021 marked the planned transition of the land back to the tribe and to its natural state. After the demolition of the building, the process to nurture the rebuild the land will start.

The end of the Oregon Trail is in Oregon City, also, and there’s an interpretive center offering guests interactive exhibits and costumed guides to portray life in the mid-1800s. Other venues that add to the city’s historical texture are the Museum of Oregon Territory and Stephens-Crawford Museum.

Farmer’s Markets are numerous and popular in the region, but the one in Oregon City stands out. It won the 2019 Outstanding Large or Urban Market of the Year award. With a mission to bring community, farmers, artisans, and educators together to “celebrate, discover and promote healthy, local, sustainable food as an integral part of a resilient and thriving local economy,” the year-round Farmer’s Market is a much-loved focal point in the city.

Not many cities can claim to have the only outdoor municipal elevator in the U.S. and one of eight in the world. Oregon City can! The original was installed in 1915, and after a few updates and renovations over the years, the still-operational outdoor elevator shuttles residents and visitors between two neighborhoods and accommodates for the drastic elevation changes within the city. If you want to take a ride, look for it at the intersection of 7th St. and Railroad Ave.

A ride up on the elevator will take you to downtown, a beloved section of Oregon City, full of boutiques and vintage and antique shops. You’ll also find plenty of spots to stop and refuel from pubs and breweries to grills and coffee shops. Oregon City also has a good mix of worldly cuisines, including Mexican, Scandinavian, and Chinese, to name a few.

Milwaukie has little bit of a Portland vibe, with its food carts, special brand of quirkiness, and love for green spaces in the city. But it’s a well-established entity in its own right. Two iconic companies call Milwaukie home. One is Bob’s Red Mill, maker of whole grain foods, established in 1978. The other is Dark Horse Comics, and American comic book and manga manager, around since 1986.

Not to be stopped by a little rain, Milwaukie is also home to the annual Umbrella Parade, a procession of the town’s residents carrying decorated umbrellas en route to the annual lighting ceremony every December.

Milwaukie’s Food Cart Pod is located right next to the MAX Orange Line and offers a great selection of cuisines and tasty treats like Thai, Mexican, Greek, pizza, and Ruby Jewel Ice Cream.

Not to be outdone by Oregon City, Milwaukie has another top Farmer’s Market, located at the Main-Harrison intersection in downtown. (It won the “Best of” in 2012.) The market runs May through October every year, offering a wealth of gift items, plants, cut flowers, and prepared foods.

Milwaukie Bay Park is a sweet spot in the city, an 8.5-acre park that runs alongside the Willamette River near downtown. The park opened in 2015, but due to citizenry input, more plans were created in 2018. The COVID pandemic slowed down any forward movement, but as of April, 2022, the project is moving again.

Milwaukie is also on the Springwater Corridor Trail, a multi-purpose paved walkway ideal for joggers, walkers, wheelchairs, and strollers. The 40-mile loop was inspired by the Olsmted 1903 plan for a parkway that would connect various parks.

John Harlow, a sea captain from Maine, is credited with naming Troutdale. The story goes that after he bought the town’s original land claim in 1872, he chose the name due to a small dale near his home, which he kept stocked with trout. He also opened several trout farms in the area. While many of the small bodies of water that once dotted Troutdale’s terrain have either dried up or were filled in the name of progress, several are thriving today.

Troutdale is a great city for those who love outdoor activities, especially anglers. Fishing is available at the Lewis and Clark State Recreation Site, Company Lake, and Sandy River Delta Park. Not within Troutdale proper but just next door are Blue Lake Regional Park and Chinook Landing Marine Park. Some of these areas also provide activities like boating, hiking, biking, swimming, and picnicking. And for those days when you prefer something more close to home, Troutdale has several city parks and green spaces within easy access.

Nestled in wine country and with eight wineries in its zip code, Forest Grove is an idyllic city that boasts an air of culture and good taste. When viticulture is such a big part of a community’s fabric, it can’t help but carry over and infuse the mindset of its residents.

Also contributing to the vibe of the city is Pacific University, known as the Pacific Northwest’s top research institute. Its mission is to guide students to “think, care, create, and pursue justice in a global community,” and with many of the faculty and students living within Forest Grove, this also favorably contributes to the city’s overall mindset.

Touted as the first city of Washington County, Forest Grove is also known for another first: the premier vintage car show in the region. Concours d’Elegance has been happening every summer for almost 30 years. It brings thousands of visitors to the Pacific University campus to view pre- and post-World War II classic cars.

Forest Grove is also known as the home of one of Oregon’s largest and oldest sequoias. This gorgeous, natural giant measures 32 feet around and 152 feet tall and has been deemed an Oregon State heritage tree.

Ready to Move to a Portland Suburb?

If you’re interested in exploring any of these five cities, there’s good news. They all have homes on the market right now. If not, these are only five of the many suburbs in the metro area. It takes time to find the perfect location, and we’d love to help you any way we can. Whether you’re ready to commit to one of these cities or are just getting started in your search, our top 1% buyers agents are ready to guide you on your real estate journey!