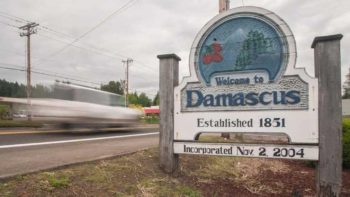 If you’ve toyed with the idea of leaving the city and heading to the suburbs, one you might not have considered is Damascus, located between Clackamas and Gresham. It’s populated with 17,223 fiercely independent residents who have fought to live life on their terms. (Read on and you’ll see what we mean.)

This small, pastoral suburb, once called “The Smallest Town with the Biggest Ideas,” has much to offer those who want access to the city but prefer a quiet, next-to-nature lifestyle every day.

If you’re not familiar with with Damascus, here are a few facts about this quiet, quaint little burg you might not be aware of.

1. Damascus is Loaded with Farms and Nurseries

Of the 16.14 square miles that comprise Damascus, of which, 16.04 square miles is land and 0.10 square miles is water, much of the city’s footprint is comprised of farms and nurseries. With spring right around the corner, make your way to Damascus and check them out!

Olson Farms—A cornucopia of fresh produce—from strawberries, raspberries, blueberries, and cherries, to peaches, nectarines, and sweet corn, not to mention the pumpkin patch!—Olson Farms brings the fun for people of all ages. Come by for U-pick berries, beautiful hanging basket flowers from the greenhouse in the spring. In the fall when the pumpkin patch is open for pony rides, a free kids play area, free hay rides, and the caterpillar barrel train.

Phil’s Farm—Phil’s Farm in Damascus is an expansion from their original one in Estacada. You’ll find everything you need here for all your landscaping needs.

Siri and Son Farms—Are sustainability and organics your passion? Siri and Sons, a fourth-generation farm, has this covered. They grow and vend a plethora of produce virtually all year long. The family began farming in Oregon in the early 1900s and has been organic since 2005.

Tony’s Garden Center—Open since 1989, Tony’s offers a large year-round variety of annuals, perennials, vegetables, herbs, vines, shrubs, trees, hanging baskets, and much more, most of which is grown right in their own greenhouses. They also offer classes and events.

2. Damascus is a Wedding Destination

Three acres of open, sweeping pastures, terraced lawns, and colorful gardens are the perfect backdrop for a wedding, and Eastfork Country Estate provides all that and more. This lovely venue boasts a picturesque, 340-degree view of the serene Damascus farm valley, Cascade foothills, and Mt. Hood.

Whether you want to host an intimate group of 50 in the Estate house or up to 200 in the courtyard, Eastfork offers their space and expertise not just for weddings, but for birthdays parties, anniversary celebrations, holiday gatherings, and rehearsal dinner.

Only thirty minutes from Portland proper, it’s a go-to venue for many!

3. Damascus Was Named with Damascus, Syria in Mind

Word has it that in 1866, with the Civil War a not-too-distant memory and before Damascus officially became a town, Edward Pedigo, a potter, came riding in on his horse, and the phrase, “The Place of a New Beginning” came to him. This thought reminded him of the story of Saul of Tarsus (aka Paul the Apostle) and his transformational journey from Jerusalem. The storyline rang true for Pedigo, and he thought the name was fitting for this new land and the new beginning it would bring to him and his fellow settlers.

4. Damascus is Home to a Giant Candle Monument

Oregon celebrated its Centennial in 1959 with everything from stagecoach rides in Frontier Village, comprised of a blacksmith shop, Barlow Trail Saloon, a newspaper, and even a City Hall with a jail. There was also an outdoor amphitheater where Hollywood stars came to perform!

The event was such a hit that it became a three-year celebration and was deemed Oregon’s “Little World’s Fair,” focused on celebrating “Man of the Past.” The name and intention behind the celebration came from a desire to contrast Seattle’s actual World’s Fair, which celebrated “Man in Space.”

The main attraction at the Little World’s Fair was a giant candle measuring 21 and 1/2 feet tall and 35 inches across, called the Centennial Peace Candle. Children from the area collected 20 tons of candle wax, which was melted with a plumber’s ladle and pumped into a huge mold constructed by Marines out of welded oil drums. First lit on June 14, 1959, the Peace Candle burned for 100 days—one inch every 36 hours.

A replica of the candle made of steel and concrete was built in 1962 and still stands today as a monument, one of only a few remainders from the Little World’s Fair.

This is what we meant by “fiercely independent.” Since 1867 when the city’s post office was established, Damascus has undergone plenty when it comes to shaping itself into a noteworthy entity.

When Metro decided to expand Portland’s urban growth boundary in 2000, citizens rallied to submit Measure 3-138 for the 2004 general election, which resulted in both Damascus and Carver (both formerly unincorporated) into the City of Damascus. The purpose: to prevent annexation from other nearby communities. This made Damascus the first new Oregon city in 22 years.

But the city’s road to any sort of self-government has been a rocky one. According to Pamplin Media Group, Damascus had seven managers in eight years, and in 2013, the mayor was recalled.

In 2016, twelve years after the incorporation, voters chose to disincorporate, which shut down the city and transferred its assets to Clackamas county. But three years later, in 2019, an Appeal Court decision nullified the vote, noting that the voter turnout fell short of the State’s 50% threshold back in 2016. Damascus was, once again, incorporated. After much ado, in 2020, the Supreme Court upheld the 2016 disincorporation vote and Damascus became officially unincorporated, once again.

Benefits to residents in an unincorporated city or town include more real estate flexibility, more privacy, and more freedom to live life on their terms. The downside can be less influence over neighbors’ choices and behaviors and slower response time during emergencies. But, depending on your personal needs and values, Damascus might be just the kind of place you’ve been yearning for!

Learn more about Damascus’s bumpy quest for classification (or not).

Curious about Buying a Home in Damascus?

If your interest has been sparked, why not see what’s for sale in Damascus? Then, get in touch with our top 1% buyer’s team at 503-773-0000 or chat with the bot on our site. We’re more than happy to show with this unique little Portland suburb has to offer!