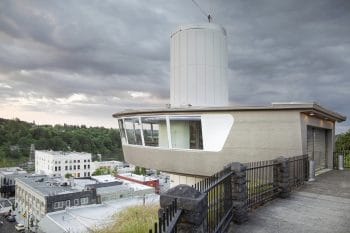 If we had to make a list of Portland suburbs posed for growth, Oregon City would probably be at the top. With a population of 37,000 and big plans for the future, this city stands as a destination in its own right — not just for tourists but for home buyers as well. Read on for five things you didn’t know about the first incorporated city west of the Rockies.

1. The Clackamas River is Awesome

Oregon City is defined by its location between two rivers: The Willamette, which flows up from the south and heads toward downtown Portland, and the Clackamas. With headwaters in the Cascade Range, the Clackamas River flows through the Mt. Hood National Forest before dropping down into farmland around Estacada. It then meets up with the Willamette River just north of Oregon City. The Clackamas not only defines Oregon City’s northern border, it gives the city its personality and character as a place of safety and abundance. In fact, Native Americans settled on the banks of the Clackamas as early as 10,000 years ago, and today this fertile area is prime farmland.

Take a 20-minute drive from downtown Oregon City and you’ll be at Carver Park, a local destination along the Clackamas River for boating and fishing. Follow the scenic highway up the river to visit the federally recognized “Wild and Scenic” stretch, which provides habitat for bald eagle, salmon, rare birds and old-growth Douglas fir. A guided raft trip or hike along the eight-mile Clackamas River Trail provides an up-close experience with these natural wonders. The river also accommodates camping and RV-ing with several developed campgrounds. In fact, the recreation opportunities along this river are almost endless, from kayaking to rock collecting, birdwatching to swimming!

About a decade ago, downtown Oregon City seemed like it might be doomed. The Blue Heron paper mill, which had defined the Oregon City stretch of the Willamette River since 1829, shut down in 2011. With over a thousand jobs eliminated, it seemed like downtown OC would suffer the fate of so many American downtowns — closed storefronts and tumbleweeds. But then, a coalition of business owners and residents pulled together to advocate for the downtown blocks, and the city invested funds in improving infrastructure. New businesses and restaurants opened up, and by 2018, downtown Oregon City was given the Great American Main Street Award, the nation’s top award for downtown revitalization that both preserves history and facilitates economic growth.

But it’s not the end of the story for downtown Oregon City — or the former paper mill. In 2019, the Confederated Tribes of Grand Ronde purchased the 23-acre site with its stunning views of Willamette Falls. After focusing on environmental cleanup for the first couple of years, the tribe is collaborating with local governments to create a public riverfront space, with construction set to begin next year. When completed, the new Riverwalk is expected to bring a whole new wave of tourists and revenue to Oregon City — the falls are the second-largest in the nation by volume and an important cultural site.

As the name “Oregon City” might imply, this settlement was once the end of the Oregon Trail. Thousands of pioneers launched their life out west from this landing point, and many stayed to create the city, which was incorporated in 1844. As the city grew and expanded over the rocky cliffs that defined its southern edge, a transportation solution was needed, so the city built an elevator to allow people to move between the two neighborhoods at different elevations. First constructed in 1915 and rebuilt in the 50’s, the elevator remains in use today and is on the National Register of Historic Places. It’s the only outdoor municipal elevator in the United States. In addition to the elevator, Oregon City has multiple other attractions, such as the End of the Oregon Trail Interpretive Center, where modern-day visitors can take a trip back in time to experiment with pioneer life. In addition to this Center, there are multiple other museums and historic buildings, festivals and events year-round. For everyday relaxation and activity, Oregon City is home to 22 parks, with one of the largest being Clackamette park where the two rivers meet. The city also has one of the region’s top-rated weekly farmers’ markets!

Question: How do you get your students into the best schools in Oregon City? Answer: You move here! Students in the public Oregon School District 62 consistently perform highly on standardized test, graduate from high school, and go on to college. In addition to seven  elementary, two middle and one high school, the district has four charter schools for customized learning. Clackamas County takes part in the Safe Routes to School program to help ensure that students can get to schools by a variety of means without danger. And it’s not just students and parents that should be thrilled about having excellent, safe schools in Oregon City — home values are usually better in areas with high-performing schools, which means all home buyers can benefit.

With a median home value of $443,770 (as of May 2020), Oregon City is not the most affordable Portland suburb, but homebuyers here get so much more than the typical suburbanite: A sense of community and a unique place to live on the edge of the Portland metro area. Homes in Oregon City tend to be larger than the average Portland home, which results in a lower price per square foot (Around $222, according to Zillow, compared to the Portland median price per square foot of $232). And no matter your budget, there’s a home in Oregon City waiting for you if you are willing to be patient and work with a realtor who’s a local expert.

With great schools, a lively downtown, and a variety of things to do, it’s no wonder that people from Portland and the wider region are buying homes in Oregon City this year. If you’re on the lookout for your next home, reach out to our Top 1% real estate agents today! We have extensive real estate sales history in Oregon City and are ready to help you.