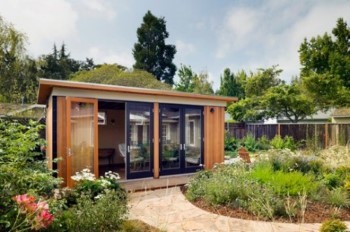 Accessory Dwelling Units, or ADUs, are really taking off in Portland.

It’s not just Portland real estate agents who are taking notice. In some high-density Portland neighborhoods, these tiny houses make up 10-15% of dwelling units, according to BikePortland.org. Over 200 new ADU permits were issued in 2014 alone.

Part of the explosion is due to the fact that the city is waiving building permit fees for these structures through July of 2016. Still, why would a homeowner pay up to $100,000 to build a structure of less than 800 square feet in their backyard? There are several reasons:
– Increase your property value and attract buyers with an extra space they could use as a studio, spare bedroom, storage shed, or a host of other uses
– Pay off a mortgage by living in the big house and renting out the tiny one (or vice versa). Short-term rentals through services like AirBnb allow you to have the best of both worlds — an extra bedroom when you need it, a revenue stream when you don’t.
– House an aging parent, returned college grad or other family member without feeling cramped.
– Age in place by moving out of the big house with its stairs, narrow doorways and drafty corners, and move into an ADU with the accommodations you need. See our blog post on retiring in Portland.
– Reduce your environmental impact and your utility bills by living in a smaller space (and, again, renting out the bigger one)

Legally, an Accessory Dwelling Unit, (also known as a tiny house) is any detached and livable structure that is added on a property with an existing home. If your home already has one but it’s not recognized by the city, take advantage of the fee waiver to get it permitted! You’ll need to do that if you ever sell the home, anyway.

If you’ve been thinking about adding an ADU to your property, head over to the City of Portland’s ADU Program Guide before you create your blueprints. It outlines the construction standards required for tiny homes.

According to Portland State University’s Population Research Center, the metro area could add another quarter of a million residents in the next three to five years, and Portland real estate agents aren’t the only ones preparing for the flood. With the help of home owners, and smart Portland home buyers and sellers, tiny houses can help keep Portland from becoming a sea of apartment complexes, combining suburban charm with urban efficiency. Will you be part of the movement?

Why Do Portland Short Sales Take So Long?