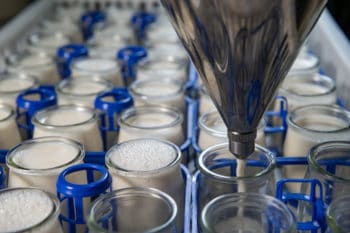 We’ve written about Portland’s real estate inventory crisis over and over for the past two years. And like everyone else, we’re watching to see how the city and developers are dealing with a growing population alongside this shortage of homes—in both real estate and rental housing. One step has been the Residential Infill Project. Another proposed effort that could be a step the direction to alleviate some of the inventory pressure is the potential Alpenrose Project started in 2021.

The 56-acre Alpenrose Dairy/Shattuck Road property could become the location for a new 193-home subdivision. After the contentious sale of the property, which put the business in the hands of Seattle-based Smith Brothers Farm, with the land on Shattuck Road still retained by the Cadonau family—founders of Alpenrose Dairy—developer Lennar Northwest, Inc., a Florida-based Fortune 500 residential construction company, proposed the new subdivision.

Here’s a quick look at how Alpenrose Dairy has served the local community for over 100 years.

Alpenrose Dairy is More Than a Dairy

Alpenrose Dairy opened in 1916, founded by Florian Cadonau. Before that, Cadonau delivered milk in and around Portland. After decades of serving the community, the eventual Portland area icon grew into more than “just” a dairy.

The Alpenrose Velodrome was built and became a cycling destination for well over 50 years—one of only twenty-five cycling tracks of its kind in the U.S. Likewise, Alpenrose Field served as a venue for youth softball and baseball games, and Dairyville became a family-friendly hub featuring a frontier town with quaint shops and an opera house. Other activities on the property included Easter egg hunts, horseback riding, special Christmas events, and July Fourth celebrations.

After the sale of the property in 2019, the Alpenrose attractions closed down. Since then, the future of the land, Alpenrose Velodrome, baseball fields, and Dairyville have remained a big question mark.

Residents Rallying to Preserve History in 2022

Grieving the loss of the century-old fixture, neighboring residents have had mixed feelings about the possibility of the development. While some have accepted the change as mere progress, others have not. The Friends of Alpenrose Farm was formed to serve as a mouthpiece for residents of the area who want to see these landmarks at the heart of their community preserved. Lennar (the likely homebuilder of the project) has not commented on their requests.

The Future of the Alpenrose Development Project

Whatever happens with the much-loved features of Alpenrose, the dairy itself—still in operation by Smith Brothers Farm—will have to relocate if the development moves forward.

According to development proposal documents, in addition to the potential 193 homes, the development would include a public trail, an open space, and recreational areas.

What Does the Alpenrose Project Mean for Portland?

It depends on who you ask. For people like those who formed Friends of Alpenrose, it signifies a loss. That is, if developers of the project choose to ignore residents pleas to retain certain features of the current property.

From an economic and real estate perspective, it could be a boon for the area. Considering the Portland metro’s inventory crisis, the new subdivision could help reduce some of the pressure and serve as a remedy to a problem that has, in part, been responsible for rising home prices.

While we won’t see any relief for a while, if the project does get underway, it could be a helpful step in the direction of easing some of the affordability pains Portland has felt for the past two years.

In the Market for a Portland Home Right Now?

If you’re wanting to relocate within the Portland metro area long before the new Alpenrose subdivision if finished—if it even is—why not get in touch with an experienced, licensed Portland real estate agent? Our top 1% buyer’s team has access to all Portland homes for sale, and we’d love to help you find the one that’s perfect for you. Give us a call at 503-773-0000 or chat with the bot on our site.

Why You Should Always List your Home on Multiple MLS Systems.

Portland Real Estate Added to the Historic Registry in 2022