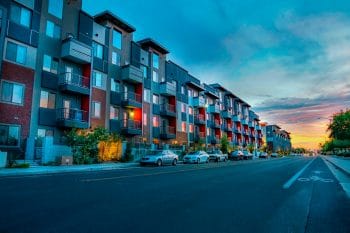 How do you add housing without increasing Portland’s footprint? Infill is the answer — but not a straightforward one. Although infill, done right, can lift real estate values and improve the overall economic health of a city, the word makes many home buyers and sellers nervous. Will Portland’s Residential Infill Project, or RIP, impact home values? What about neighborhood character? However you feel about the issue, this article will take a look at the recent history of Portland’s infill efforts, and what planners are envisioning for the city’s future.

2015: The Birth of Portland’s Infill Project

In any given neighborhood, there’s going to be underutilized space, whether it’s empty lots, homes that are oversized, older homes that can be torn down, or just big backyards. Infill happens naturally in any growing city, taking advantage of those underutilized spaces to build places for incoming residents to live. Much of it is done by developers who come in and build apartments or condos – unfortunately, they also tend to replace single-family homes with larger versions of the same concept, which doesn’t add additional housing units. However, when zoning allows for it, homeowners can also be the drivers of infill by adding additional units on their property (Accessory Dwelling Units, or ADUs) or by splitting a larger home into two or more smaller units (“plexes”).

About two years ago, Portland’s Bureau of Planning and Sustainability (BPS) saw a need to ease up some regulations that restrict infill. With the goal of someday housing many more people in a city that many refer to as a “giant suburb” (lots of single family homes on average to large lots, not a lot of other options), BPS created the Residential Infill Project. The RIP is Portland’s comprehensive strategy for adding housing without detracting from Portland’s unique streetscapes.

Whether it’s a new highrise apartment building or just changing the rules to allow homeowners to add Accessory Dwelling Units, all forms of infill have the potential to be controversial. That’s because, in a world with limited real estate, it’s difficult to add housing without changing the character of a neighborhood. Portland’s streets lined with craftsman bungalows behind leafy maples evoke a much different feeling than San Francisco’s Queen Anne row houses.

However, proponents of RIP argue that row houses — along with other high-density concepts like cottage clusters, ADUs and multiplexes — are essential to fill in the “missing middle” for housing options in the metro area: homes that are bigger and more autonomous than an apartment, but smaller than a single-family dwelling. This missing middle also fits neatly into the existing housing matrix by taking advantage of unused yardspace (eg. detached ADU), building up (eg. garage apartment ADU), and maintaining the historic exterior of larger homes split into multiple smaller units.

Why go with dense housing?

The goal of the Residential Infill Project is to add density to the roughly 145 square miles already within the Portland city limits without changing neighborhood character drastically. Density can be great because it allows more people to live centrally to places of employment and the other urban amenities they need — shopping, schools, etc. It reduces the need for transportation in and out of the city and strengthens the economic vitality of a city by keeping dollars local.

But there’s another, big, reason that Portland needs density: Growing “out” is not an option. In fact, Oregon has a unique set of land-use laws designed to slow the growth of cities into the surrounding countryside. These laws severely limit urban sprawl and require cities to maintain an Urban Growth Boundary, or UGB. Although Portland plans to expand the UGB over the course of the next several decades, in the near-term, infill is the only real option for adding housing.

For the first two years of its existence, the RIP was in the “concept development” phase. Polls were taken, options were explored, Portland City Council approved the general idea, and the public got involved even further to develop the project’s vision.

In early 2018 Portland city planners revealed a proposed RIP plan that divides the project into three key parts: Scaling homes appropriately for lot sizes, creating a new overlay zone to allow more housing options across Portland, and revising the rules for narrow lots. This plan is available on the BPS website.

The first part of the RIP proposal introduces a “Floor Area Ratio” concept that’s designed to keep limit the size of homes based on the size of the lot. However, homes are allowed to be bigger if they include multiple housing units (eg. basement unit), and floor space can also be added in the form of accessory units.

However, it’s the second part of the RIP proposal that would go the furthest toward adding infill in the city. It introduces a new zoning overlay which would effectively rezone more than half of Portland’s real estate to allow that “missing middle” of housing to come in. Most of the areas proposed for the zoning overlay haven’t allowed duplexes — or any kind of plex — to be built since 1959.

Critics of the plan say it doesn’t go far enough, and that only 85 new housing units a year will be built under the RIP’s proposals (the proposed narrow lot rules require some attached housing, but otherwise do not encourage infill). On the other hand, passing the RIP plan would be historic. Although many US cities passed “single-family only” rules in the 1950’s and 60’s that are similar to Portland’s, our city is the only one considering repealing those rules for the majority of the urban real estate.

We say “majority” because of another RIP concern: The fact that the zoning overlay does not reach Portland real estate east of the I-205. That means homeowners in some of Portland’s fastest-growing neighborhoods won’t have the opportunity to redevelop for multiple units, or add an ADU if their zoning currently restricts it. However, the first part of the proposal applies, meaning that for new construction or home expansions, floor area can be extended based on the number of housing units.

The Portland City Council was originally expected to vote on the proposal in fall of 2018, however, now the vote has been pushed back until the spring of 2019. If passed, the RIP will then go into the implementation phase. Will Portland real estate be impacted? We’ll have to wait and see. Meanwhile, home prices continue to increase across the metro, affecting affordability and heightening the demand for homes of all sizes in the area.