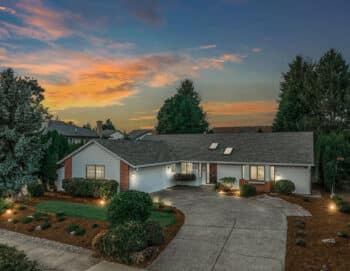 Let’s have some fun. I’m writing this post for the Portland real estate market out of my own curiosity. Licensed since 2003, my team has sold over 2,000 homes in the metro. Honestly, I couldn’t answer this question prior to doing my own research, nor do I know of anyone trying to answer this question. But I do find it fascinating. We already know that single level homes sell faster and for more money per sq. ft. than any style of home with more than one level. We know that homes with bedroom suites sell for more than those without (everything else being equal), homes with septic systems sell for more than homes with public sewer, and that homes with ADUs sell for more than those without (but not faster). We know exactly how much more, because we conducted the research ourselves.

In terms of fashion, it seems like the 80s were all the rage and now we are moving into recreations of the 90s for fashion and general style (even in real estate trends). This is part of my overall curiosity on whether homes built in the 80s or 90s sell for more.

In terms of construction quality, there isn’t much notable between the two decades. Some 80s homes came with double pane black frame aluminum windows and the 90s were mostly white framed vinyl windows. Many 80s homes used T-1111 or cedar siding. 90s homes used a lot of vinyl siding, and in some cases the awful fake stucco, called EIFS. The two decades are not known for high quality construction (this doesn’t mean there is necessarily anything wrong with them, and most wouldn’t be in the same original condition today regardless).

A ton of split level homes were built in Portland in the 80s. The style didn’t start in the 80s, there are bunches of them in Portland starting in the 60s. But I think they must have peaked in the 80s and then they nearly completely disappeared in the 90s (but not entirely until the 2000s).

The 80s split levels are pretty simple. You walk up a set of stairs to go to a landing pad entrance. From there you can take a short set of stairs to go up or down. Upstairs there is typically a living room to the right, small dining room in back with maybe a deck. Straight ahead and to the right is the galley style kitchen. You go to the left to walk down the hallway where there are typically three bedrooms and one or two baths (maybe a suite). If you went downstairs, you’d run into the family room, maybe a half bath and laundry room, and the rest of the lower level to the right would be the attached garage.

A ton of single level, Ranch style homes were built in the 80s (but also seems to be the case in nearly every decade and so is not particularly distinctive).

A number of 70s-reminiscent quirky luxury homes were also build into 80s. These properties are characterized by having to clear rhyme or reason to their sprawling multi-level design. Their roof pitches went all over the place and they despised symmetrical construction and standardized layouts. Different levels would often have sunken areas to make sure nothing was uniform. Each home is an adventure to walk through (in my opinion). Yes, this is not a technical description, but at the time of construction they were referred to as modern or contemporary. Now I find them most often termed, “custom,” or “unique.”

The smaller homes built in the 90s were single level Ranch homes, typically 3 bedroom and 2 bath and not over 1,500 sq. ft. What I think it most interesting about the 90s is they started the medium-small traditional home build and made it very popular. A ton of traditional style homes under 2,000 sq. ft. were built in mass in the 90s. These standard homes were defined by a two car attached garage in front, opened into an open living and dining room, with the kitchen behind the garage in back. Sometimes there is a guest bath on the main level and laundry room. Upstairs you typically had 3-4 bedrooms and 2 baths.

The biggest homes built in the 90s were luxury traditional properties, mostly built on the west side of Portland.

Alright, let’s get down to the research, and we’ll start with the criteria. To be included in our report the home must have sold in the city of Portland proper. We’re looking at all home sales from 1/1/2022 to 12/1/2022. The home must be detached single family, not a condo or townhome. We also cut the price off at 1,500,000 to avoid extreme examples.

Interesting, right? At least it is to me. Homes in the 90s tend to be a little bigger overall, but despite being 10 years newer on average they sold for a little less per sq. ft. than their 80s counterparts. Stay tuned for more Portland real estate market research! Sign up for our real estate news monthly email reports here.

Work with a Top Realtor

My top 1% sellers agents and top 1% buyers agents would love to hear from you. We’ve completed over 2,000 home sales in the greater Portland metro area and would love to connect with you today! Chat with the bot on this site or give us a call today. We’re passionate about Portland real estate, but even more so about serving our client’s needs.