Is your Home a Flood Risk? Portland Housing Market 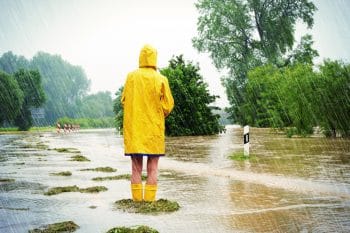 With floods in the news lately, it’s hard not to think about the risk to your own home, whether it’s in downtown Portland or along one of the many creeks, rivers and wetlands in our metro area. As a real estate agent, my job is to fully inform anyone buying a home in Portland what the challenges and risks may be with any particular property.

When it comes to understanding flood risk, the City of Portland department of Environmental Services and other agencies have done most of the legwork. With online mapping tools, it’s pretty easy to find out if water has ever risen to the level of the home and whether it is expected to do it again in the future.

Although flooding is rare in Portland, there have been some pretty spectacular ones in the past. The Great Portland Flood happened back in the spring of 1894, when the Willamette River – which runs south-to-north through the city – rose 33 feet above its banks. All of what is today downtown Portland flooded.

The shipyard community of Vanport flooded famously in May of 1948. Built very close to the Columbia river to house thousands of primarily African-American workers, this entire Portland neighborhood was destroyed. All it took was for a 200-foot section of the dike holding back the river to collapse suddenly. Fifteen lives were lost and all residents of Vanport were left homeless, eventually resettling in the neighborhoods of Northeast Portland.

More relevant to Portland home buyers today is the 1996 flood. This time, generalized rain and snow throughout the region caused all waterways to rise, from tiny Johnson Creek to the mighty Willamette and Columbia rivers. According to the Oregonian,
“Water reached the sidewalks of RiverPlace in Southwest Portland and came within inches of cresting the harbor wall in downtown.  Eventually, the Willamette crested at 28.6 feet in downtown, nearly 11 feet above flood stage.” More than just flooding downtown Portland, the rainfall caused homes in the West Hills to slide off their foundations.

Prior to the construction of cities in the Columbia River Basin (which encompasses all of Portland), the Columbia and its tributaries flooded naturally just about every spring. Water was absorbed by surrounding wetlands and humans built their structures far above these areas. After the major Portland flood of 1894, the city began looking at development differently, incorporating watershed management as a means to control flooding.

The USGS defines a Watershed as any area of land where water flows to a common outlet. Every drop of rain that falls in the Portland metro area eventually flows to the Columbia River. However, within that watershed are six smaller ones, most of which drain into the Willamette River before it empties into the Columbia. That’s why pollution anywhere in the Portland Metro area contributes to pollution in the two major rivers, and why small improvements to the watershed upstream can prevent flooding downstream.

Portlandmaps.com is a great resource to answer many real estate questions, including whether a given home is in a floodplain. When the map loads, simply type the address in the search bar, or navigate to it on the map using the zoom buttons. Clicking on the property of interest will bring up a sidebar with every piece of information the city has on file for that lot. Scroll down past the general property description to the “Public Safety” tab. Then scroll down to the “Hazard” section to see if your property is in or near a FEMA Special Flood Hazard Area (SFHA). You can also learn if the home was affected by the 1996 flood, and if it has any steeply sloping areas, which are a landslide risk.

If your home is in the SFHA, there’s a good chance a lender will require flood insurance to purchase the home. Your real estate can help you understand the risks and rules around living on a floodplain or in a landslide risk area. Most often, flood insurance is reasonable and may only add a thousand or so to your cost of ownership annually.

Remember the six Portland area watersheds we mentioned? There’s another map you can check out to find out which watershed your Portland neighborhood belongs to at Portland.gov.

The map also shows ongoing watershed improvement projects. For example, in Ladd’s Addition, the Environmental Services division is working with property owners in industrial areas to plant over 600 trees that provide stormwater interception and infiltration without interfering with industrial usage. In Lents, the city of Portland purchased 63 acres in a flood-prone neighborhood and restored it to natural wetland.