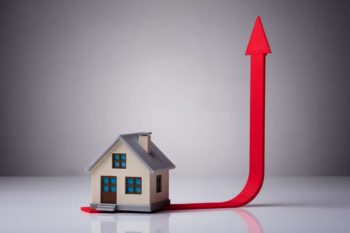 The trend of home prices has only proved itself stronger this week. On Tuesday, Case-Shiller reported the biggest home price increase in 15 years. Their home price index found a 12% annual gain for the month of February, the highest recorded since 2006. That’s up from 11.2% in January.

The S&P CoreLogic Case-Shiller Home Price Index measures the price of home sales across the United States using the “repeat sales method.” This means that they calculate percent increase and decrease based on homes that have sold at least two times. Their methodology excludes new construction, condos, apartments, etc. Basically, they are looking at how single-family homes appreciate in order to gauge how much home prices in a particular month.

The fact that home prices are rising at a similar rate as they were before the 2008 recession is big news. So how does Portland match up?

Portland’s Home Prices Rise Along with Other Major Cities

According to Case-Shiller, Portland’s annual gain for February was 11.4%. That’s fairly on par with the 19 other major metropolitan areas the index analyzes. The cities with the largest increases were Phoenix at 17.4%, San Diego at 17.0%, and Seattle at 15.4%. Chicago and Las Vegas find themselves the only cities on the list with an increase in the single digits.

While Portland’s gain is on par with that of other major cities, it’s still a huge gain. And our local RMLS data confirms that home prices are on the rise. The latest monthly data tells us that the median sales price for March of 2021 went up 14.8% from March of 2020. Why is this number higher than Case-Shiller’s? For one thing, it includes condos and new construction – we’re talking about anything that sold in March. For another, it’s only comparing the two months to one another, not calculating an annual gain. But still, there’s no getting around the fact that prices in Portland are rising fast.

Does Rising Home Prices Mean Portland Is No Longer Affordable?

We should note that average home price is not the same thing as affordability. Affordability takes into account median income along with housing costs. If Portland’s median income has been increasing at the same rate as home prices, we can conclude that affordability remains strong. According to the U.S. Census Bureau, the median household income for Portlanders in 2019 was $71,005. But the National Association of Realtors concludes that as of July 2020, a household making $100,000 can only afford 37.1% of the housing inventory. Those earning $50,000 can afford only 3.2% of homes that go on the market.

And those numbers represent a time when Portland’s inventory crisis was just beginning. We’ll have to wait for more of the 2020 census data to be released to get the whole picture. But if the rise in home prices outstrips the rise in wages, Portland’s affordability could take a real hit. Low income households will be affected the most by rising home prices, so now is a good time to investigate down payment assistance programs that encourage equitable home ownership.

We’ve been stuck in the quagmire of low inventory in Portland for months now, and so far this problem shows few signs of letting up. Our monthly RMLS report reports that March inventory, which is the ratio of active listings to closed sales, dropped to 0.8 again, returning to January levels. Once again, the problem doesn’t seem to be that there are fewer houses going on the market so much that the demand is extremely high.

You can see here that the number of new listings for March 2021 is at nearly the exact same amount as for March of the previous two years. And it’s up considerably from February – about a 40% increase. Compare this to the number of active listings:

There’s been virtually no change from February to March, despite the uptick in new listings. This suggests that homes are selling fast, and that demand is simply higher than supply. Total market time decreased from 42 days in February to 37 days in March. This time last year, March total market time was at 61 days. And things don’t seem to be slowing down as we approach the end of April. The latest RMLS data tells us that homes averaged only 7 days on the market this past week.

The short answer: yes. Portland needs more homes on the market if we’re going to see an end to the competitive bidding wars that seem to have become commonplace. Total market time is down in nearly every area in the Portland metropolitan area, while every area saw an average sales price increase.

That being said, when you break the numbers down, there isn’t a direct correlation between price increase and decreased days on the market. For example, Beaverton/Aloha had the shortest time on the market in March at only 15 days. Yet they also topped the list for lowest increase in average sales price at only 6.1%. Compare that to Lake Oswego/West Linn, which had the biggest increase in home prices at 15% – but also the longest total market time at 77 days. What this suggests is that high demand isn’t necessarily affecting the affordability of Beaverton as drastically as it is more exclusive areas like Lake Oswego. We’ll have to keep an eye on this trend to see how it pans out over the coming months.

The condo market has been the exception to the rule during the hot seller’s market of the past year. Inventory has been higher, and demand lower. But over the past few months, condos have been closing the gap. And that continued in March, as the gap between open listings and closed sales narrows.

But just because the condo market has been weaker than the house market doesn’t mean that condos are exempt from price increases. In fact, the median sale price for condos continues to outstrip both 2019 and 2020 numbers by a long shot.

After a stagnant 2020, condos may see a slow but steady rise in popularity, especially if competition for single family homes stays as high as it is now. Keep in mind this report is not distinguishing between downtown Portland condos and condos throughout the city. Portland downtown condos are not performing as well as the rest of the metro.

For the short term, we predict that Portland home prices will keep going up. The latest RMLS data tells us that inventory has stabilized during the first few weeks of April, remaining about where it was at March’s low point. But it hasn’t started rising yet. We could be at a “trough” – a bottoming out before a rise. But it will take time to slake the thirst of demand. And until that happens, you can expect home prices to continue to be on the rise.

Looking to buy or sell? The best way to make the most of your real estate transaction is with an experienced agent at your side. Check out our top 1% buyers agents or top 1% sellers agents today. They are ready back you up with their extensive knowledge of the Portland real estate market!

What is a Foursquare Style Home in Portland?