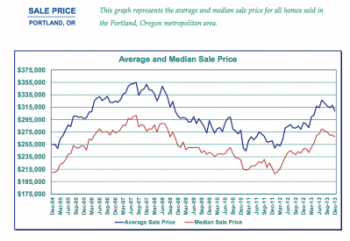 The new year is off to a good start for Portland real estate buyers, sellers and agents, according to the RMLS Report for the Portland Metro area for December 2013.

The figure that stands out in this month’s real estate market report is that median and average home sale prices in the Portland area are up by nearly 13% compared to last year. Although the number of closed sales and new listings are down from November, the month of December overall pulled in ahead overall compared to the same month last year. And, the number of pending sales reached 1,484, the most for any December since 2006!

What’s causing all of this positive Portland real estate market action? Portland always has been and still is a great place to live, and we know it will remain that way through 2014. But here’s a little tidbit to back us up, from data collected by the real estate site Redfin.

Redfin announced last week that Concordia neighborhood in Northeast Portland is one of the “hottest” neighborhoods in the country right now! It comes in at number 8 on the website’s list of neighborhoods that had the greatest growth in popularity over the past four months. Its list of “Hottest Neighborhoods” spans cities from Las Vegas to Seattle and LA to Austin.

According to Redfin: “Highly ranked schools and scenic community parks look like the obvious common thread among the top neighborhoods.” With Concordia University as well as the Alberta Arts District lying within Concordia’s desirable blocks, it’s no wonder this Portland neighborhood made the list. However, the story continues, “the real trend in 2014 neighborhood popularity is a short commute at an affordable price. The trending neighborhoods offer a short drive to or easy access to a commuter rail line at prices that are not the most expensive in the city.”

One again, that’s Northeast Portland to a T! In fact, looking at the top five “trending” neighborhoods on Redfin for Portland, Eliot – also a Northeast ‘hood – comes in at #2.

With that 13% rise in home prices, not to mention the low 3.2-month inventory, it’s no wonder that Portland home buyers are looking out to these “locals’ secret” neighborhoods for more affordable homes that still offer all of the great features of our city.

Are you ready to take advantage of the mid-winter lull to buy or sell your Portland home? Inventory is low right now in the Portland real estate market, and you need an agent who is on top of things. Contact your Portland real estate agent today. Remember, your neighborhood doesn’t have to be on any “hottest” list to be a great fit for you or your potential buyer – the right home will be the one that meets their needs above any other!

Average Days on Market in Portland Real Estate by Area 2014