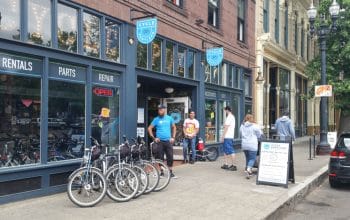 It’s getting close to the end of the year, and my real estate clients want to know — what were the top neighborhoods of Portland this year?

My first answer, of course, is that they all are. You don’t have to be a real estate agent in Portland to see that many people are relocating here and that homes across the region are moving at an astonishing rate, from downtown to the far-reaching suburbs.

Nevertheless, Portland newspapers and real estate news sites will soon be releasing their reports on what the top neighborhoods were, and I definitely have a few to put on the list!

First, let’s look at what numbers go into figuring out the hottest, the hippist, and the healthiest real estate markets across the Portland region. Then we’ll look at Portland neighborhoods and outlying cities that might qualify!

How We Got Here

You know better than to come to this real estate blog for quick, unresearched answers! To decide which neighborhoods and suburbs are the “Top” in the Portland area, I look at a combination of factors.

First is to take a peek at the RMLS report for the region. The RMLS compiles real estate data for Portland and outlying areas and provides a monthly Market Action report that I send out to clients (get it free here). In case you haven’t been reading it every month, here’s what it says:
Overall in Portland, the number of new listings is up in 2016 compared to 2015. However, the actual number of closed sales is down from last year.

Another useful data set from the RMLS is the actual number of homes sold by neighborhood or city.

So, without further ado…

Most people break down neighborhoods in the city of Portland into six sections: North, Northeast, Northwest, Southeast, Southwest, and East. The east/west dividing line is the Willamette River, and the north/south dividing line is Burnside St. The top neighborhoods in Portland this year were in the Northeast, Southeast, Northwest, and Southwest quadrant.

Northeast Portland: Up and Coming.

I couldn’t pick just one Northeast Neighborhood as the most popular or trendy right now. They all are! People are moving up here because real estate is still generally affordable, neighborhoods are accessible and family friendly, and it has a great old-Portland vibe. People are raving about Alameda and Irvington. Homes were moving quickly in the Sabin neighborhood in 2015, with an average of just 15 days on the market! This has lowered to 14 days so far in 2016. The increase in median home price for this area is nearly 15%. Other notable Northeast Portland neighborhoods in 2016 included Beaumont-Wilshire and Grant Park.

Northwest Portland: Where the most homes sold last quarter.

Northwest is swiftly becoming one of the hottest places to buy a home in Portland, which is amazing because it’s also one of the most expensive areas in the city. In fact, the Northwest neighborhood of Forest Heights (including Cedar Mill and Bethany) sold the most homes in the third quarter of 2016, according to the RMLS: 381. To give you some context, the RMLS reports that in those three months, a total of 809 homes sold in all of West Portland. So one neighborhood is selling nearly half the total homes for that entire Portland quadrant! Hillside is another Northwest neighborhood that’s become very trendy for luxury homes.

Southwest Portland: So close but yet so far

Southwest Portland has been getting major accolades this year for being close to downtown, yet feeling “outside” of the city – in a good way. Hills and trees abound, as well as Tryon Creek State Natural Area, the only Oregon state park located within a metropolitan area! One hot neighborhood this year has been, South Burlingame, near Lewis & Clark college — also a bit of a foodie destination for is proximity to some great restaurants and grocery stores!

Southeast Portland: Hip as ever

Foster/Powell neighborhood in Southeast Portland, known fondly by locals as FoPo, was predicted by Redfin to be one of the hottest neighborhoods in Portland in 2016, and I think they were right. Last quarter, they sold the second highest number of homes for any Portland neighborhood (after Forest Heights): 231. It’s known as a great working-class neighborhood with an easy commute to downtown and plenty of pubs, restaurants and quirky local businesses in walking distance.
Also located in Southeast Portland: Laurelhurst. This is an older neighborhood with lots of charm, and buyers are simply going nuts over it. It’s a family friendly, peaceful place that’s again – not to far from downtown!

Beaverton/Aloha: Head for the hills!

As I blogged about a couple months back, Beaverton is a super hot destination for those wanting to be close Portland with a little bit more housing affordability and quieter lifestyle. Money Magazine named Beaverton one of the Top 10 Small Cities in the West in 2016, and the #1 Best Place to Live in Oregon! The median home price here (YTD as of October) is $315,000 — less than most neighborhoods in the City of Portland. That’s despite a growing tech-based economy and many families moving to the area. And, it’s just over the hill, ten minutes away from Portland on the MAX.

Farther west from Beaverton are the cities of Forest Grove and Hillsboro, which together saw the second-highest gain in the Portland Metro area for median home prices YTD: 14.25% (North Portland gained slightly more). A gain like that speaks of an increased demand for homes, and it all has to do with this area’s proximity to Portland, and ease of access through the MAX. Of course, there are great things about Forest Grove and Hillsboro themselves — great schools, and great quality of life for families, retirees, and anyone who doesn’t care for hectic city life!

Milwaulkie is a small, working-class city with great proximity to Portland via a recently added light rail line. Quick, snatch up a home here before it get discovered! Or maybe it already has been, because inventory has been hard to come by here. Milwaukie is a family oriented community with quiet streets and a recently renovated downtown and public riverfront. Now that the city is putting funds toward urban renewal, we can expect this suburb to definitely be a top real estate buy in 2017.

Ready to invest in the Portland real estate market, or to capitalize on your gains? Our team is here to help you do that. Whether it’s this year or next, your plan is our top priority!