How Many Californians are Moving to Portland? – 2022 Report 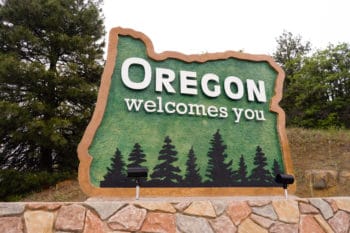 Californians have been migrating north to Oregon for years, and despite the pandemic, the past couple of years have been no different. While COVID did slow both in- and out-migration in early 2020, some population growth returned in 2021, according to the Portland State University Population Research Center (PRC). This isn’t to say that Oregon is experiencing a population boom. It isn’t. But, Multnomah, Washington, and Clackamas counties all saw increases in population with key factors being more affordable real estate and job availability.

With home prices increasing as they have in the past couple of years here in Portland, it’s hard to believe people find them attractive, but they do. Especially when coming from California, where the median home price was around $800,000 in 2021.

Compare that with Portland’s median home price coming in around $575,000 and add the job security provided by major companies like Intel, Nike, Adidas, and Columbia Sportswear, not to mention nearby Boeing, Tektronix, and The Standard Insurance Company, it stands to reason why so many are fleeing The Golden State and heading north.

How Many (Overall) People Are Moving to Portland?

According to the U.S. Census Bureau, Multnomah, Washington, and Clackamas in Oregon and Clark County in Washington saw the highest numbers of new residents from California alone between 2015 and 2019, with an average population increase of Californians at 11,247.

The PRC report adds that almost 1.9M people currently reside in these three counties with more than half of the state’s total population growth between 2020 and 2021. Of those Multnomah and Washington counties saw more than 4,000 new residents and Clackamas county added over 3,000.

If those seem like pretty high numbers, keep in mind how the impact of the birth and death rates figure into Portland’s and Oregon’s population counts.

Twenty-seven of Oregon’s 36 counties saw a natural decrease in population, which means there were more deaths (2,210) than births in 2021, according to the PRC report. In the end, population growth in Oregon in 2021 was driven by net in-migration (around 25,000). Of all Oregon cities, Portland added the most residents (because it already starts out being the most populous city and largest in geographic size): around 5,000 people for an increase of .8% (less than 1%) between 2020 and 2021.

Minimal Growth in Portland, but Significant Growth in Oregon

The table below gives an overview of Oregon’s in- and out-migration for 2014-2018. From it, we can see that even during this time period, most of Oregon’s net in-migration did, in fact, come from California.

How Many People Are Moving Out of Portland?

We recently wrote that some are leaving the area and going south to California while others are heading further north to Seattle.

An article on Stacker.com reflects the decrease in U.S. mobility—only 9.3% of all Americans moved between March of 2019 and 2020—and shows the top 40 states where Oregonians went. The top five are:

Read more about where Oregonians moved to, as well as where in-migrants came from.

Migration to Portland is Good for Oregon’s Economy

People moving to our state is good for our economy because it provides labor force needed for local businesses, says the Oregon Office of Economic Analysis. State economist Josh Lehner says it’s our lifeline. Especially when we take into account death and birth rates mentioned above.

Birthrate decline is a world-wide phenomenon, influenced by many factors, including marital status, job status, childcare costs, and more. But as Lehner says, “Ours is more dramatic than most other states.” Here, it’s at a 30-year low and happening almost ten years sooner than Lehner initially projected.

The future of Oregon is a big question mark right now, and this is why inward migration to anywhere in Oregon matters. Regardless of what Portlanders have felt about California migration, we need it for our economy to remain strong.

Of course, people move to Portland from other states, too. Oregonlive.com reported that inward migration to Oregon between 2018-2019 was four times the national rate with people coming from a variety of states, as shown in the image below.

There’s no doubt that in-ward migration brings challenges, like the lack of sustained housing supply for the demand. Portland’s Residential Infill Project is one answer to housing challenges in the area.

And what about the wear and tear on Oregon’s highways due to more automobile traffic? Or parking to accommodate all the vehicles in-ward migration brings?

Portland is still grappling with these issues, striving to find the balance between the need for in-migration and its inherent challenges.

Moving in or out of Portland? Let a Top 1% Real Estate Agent Help!

Whether you’re looking to sell your home and move elsewhere or whether you’re new to the area and want to buy a home in Portland, our top 1% Portland buyers agents and our top 1% Portland sellers agents can help. Get in touch with us today or use the chat bot on our site. We have almost 20 years of real estate experience in the Portland metro area and a strong focus on customer service. Let us help you make your move easier!