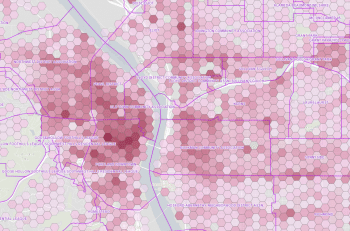 Is Portland, Oregon Safe? This is a legitimate question and like most good questions it has a nuanced answer. There are parts of Portland that have been hit hard recently, and other neighborhoods that haven’t seen any statistical crime increase. Thankfully, we have exceptional, official Portland Crime Maps provided by the city itself. This crime map is incredibly detailed down to the street level and you can even select what type of crime you’d like to research. You’ll notice the current map is the feature image of this article and downtown Portland is not faring well.

The Portland Police Bureau creates detailed monthly crime charts and makes them available to the general public. Here again, you can see what crimes have been committed, how often, and what type. There is another (much smaller) crime map here that you can click and see the crime reports per Portland neighborhood.

This Portland personal crime chart above for shows there hasn’t been a significant increase in this category in the last five years. Personal crime refers to assault, homicide, trafficking, kidnapping, etc.

This Portland property crime chart above also shows no increase for the last five years. (But hang in there, I know what you’re looking for and will post it next.)

Here is one more look at the crime statistics in Portland, Oregon. Crime is actually down here.

Is Portland, Oregon Safe Compared to Other U.S. Cities?

So is Portland Safe or Not?

If you use the available crime maps, you can find parts of Portland that are incredibly safe. You’ll also notice there are other parts of the city that are probably not considered safe, if safe would be considered an average rating for the U.S. But this is true of nearly all cities in the U.S., there are parts of those cities that are incredibly safe and parts that are not. Thankfully the local city government and police bureau are very forthcoming with this information and it is easily accessible by anyone thinking of moving here, or moving within the metro.

If you’re considering moving to or within Portland, our top 1% buyers team can point you to official resources to help guide your decision-making. We also are skilled in playing match-maker, helping you find a home that fits you best. Try out our Portland smart search home platform, or contact one of our top agents today.

How to Pick a Brokerage: Splits, Leads, Training