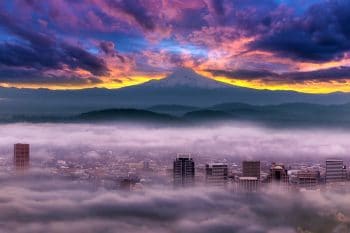 Median rents are going up across Portland. The population is growing, and Portland real estate market values are all over the place. For an explanation, some would look to our neighbors in California.

The Golden State is by far the biggest exporter of residents to Oregon. According to the Oregon Employment Department, about 40,000 people move here from California every year. Currently, 43% of adults living in Oregon were born in the state, while 18% were born in California, says the Oregon Office of Economic Analysis.

All this migration to Oregon has significant impacts on the Portland housing market: We need more homes, especially in the Portland area. But is it fair to say that California is taking over the city in 2019?

Let’s look at the issues of rent, population and real estate values one at a time.

Impact of Californians on Portland Rent

It would be easy to pin the blame for high rents on California, given the influx of people from that state and the facts that rents are generally higher in California’s metro areas, meaning that new residents from that state are prepared to pay more.

Taking a closer look, however, we find that demand for rentals surged nationwide in 2019. Rents went up by 3% across the country, so it seems that Portland is very much following the national average.

Here’s a better explanation of why rents are going up everywhere: More people are renting versus buying a home. A survey from Freddie Mac said that a record 82% of renters found renting to be more affordable than owning a home in 2019. That’s because saving up for the down payment can be difficult when you’re renting. (Fortunately, Portland has great programs for first-time homebuyers — check out our updated 2019 list here.) Also unfortunately, they are not paying attention to conclusive research that home ownership is always a better long term investment than renting, typically only taking 2-4 years to be in a financially better position (as of this article 2 years and 11 months).

In short, it’s not California causing Portland rents to go up, but a general demand for rental housing at a time when buying a new home is out of reach or just not desirable for many renters.

Earlier in this blog post, we said that 40,000 people move to Oregon from California each year. What we didn’t mention was that every year, about 20,000 Oregonians leave the state and make their home in — you guessed it — California.

State economists estimate that when people move to Oregon from California, about half of them first land somewhere in the Portland metro area.

That may sound like a lot, but the city of Portland itself is actually #56 for growth out of the top major U.S. cities, according to the US Census Bureau. It dropped from the top 5 in growth in 2016, to the bottom half of major cities in the U.S. in 2019. That’s a huge change in a short period of time!

Bottom Line on California vs. Portland

No one moves to Portland more than Californians, but no one moves more from Portland to any other destination than California. Bottom line, we are neighbors. It is better to avoid blaming each other for local problems and try to get along.

Got a question about the Portland real estate market? Our team is happy to help, providing top ranked customer service and reasonable commission rates in the Portland metro area.