Is Portland the new California? 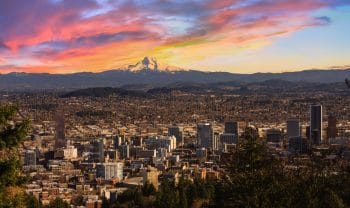 Although California dwarfs Oregon in population, economic output and real estate values — as well as the number of days of sunshine! — the fact is that many more people come to Oregon from California than move in the other direction. Can Portland’s recent boom be blamed on California, and will Oregon soon be just another piece of the Golden State?

There’s no question that these two West Coast states have a relationship, beginning with a parallel history of development. Colonization began with timber and then gold rushes, followed swiftly by agriculture in the lush river valleys. Climate took it from there, with thousands pouring to California’s sunny southern cities while Oregon remained a timber-and-shipping state.

Portland’s population barely grew until about 1900, when it shot up from about 100,000 to the 400,000 range. It stayed there until about the 1980s, when the boom-time really began. Today about 640,000 people call Portland (proper) home, and a total of 2.4 million in the entire metro region including Beaverton, Gresham, Hillsboro, and more. Oregon altogether has about 4 million people.

Compare that to California, which today is the most populous state in the Union, with nearly 40 million residents! Of course, it has more real estate: Take the land area of Oregon, add an area equal to the state of Florida, and you get California.

Folks in Oregon and Portland have the perception that Californians are swarming in and buying up all the homes, driving real estate costs up, but in fact Oregon is only the 5th-most popular state for Californians to move to.

According to the Orange County Register, the top states Californians are moving to (by order of incoming residents in 2016) are: Texas, Arizona, Washington, and Nevada. Overall, though California exports more people than any other state, per capita, they’re on par with states like Washington or Alabama. According to the article, Californians moving out of state in 2016 equaled just 1.66 percent of the population, giving it the third-best retention rate in all the country. Not what you expected, right?

Of course, Oregonians know a good thing when they see it — or if they’re born into it — as well. According to number-crunching recently performed by the Oregon Office of Economic Analysis, 43% of adults currently living in Oregon were born in the state; 18% were born in California, and 6.4% in Washington. We can expect these numbers to skew more toward the out-of-staters for a city like Portland, but the report did not offer metro-specific figures. They also found that roughly 8% of adults who were born in Oregon now live in California — so it’s not a complete one-way migration.

The relationship between Californians on the move and the increase in Portland home values has not been extensively studied, but it’s pretty clear that migration, while a having a major impact, is not the only reason. As the State of Housing report released this week by the Portland Housing Bureau confirms, a lack of new housing construction — especially new low-income housing — in the city has contributed heavily to the climb in home prices and rents in the past few years.

Still, median home values in Oregon’s cities are far less than in places like San Diego, Los Angeles, and San Francisco. According to Zillow, San Francisco has gone up to a $1.3 million dollar median home value, while the southern California metropolises hover around $600,000 as of this writing.

Is Portland the new California? No. We have a long ways to go before our metros are nearly as large or real estate prices nearly as high.