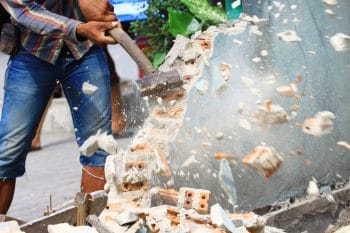 Want to know the future of the real estate supply in the City of Portland? One strategy is to look to the past — specifically, to old homes that are being demolished.

Portland suburbs have been adding housing on new tracts of land as population pressures push growth outward. For residential construction in the City of Portland, these large tracts of land simply don’t exist. Usually, to build, developers first have to tear down an older home. (We are not advocating this, just reporting on it.)

Between 2000 and 2016 in Portland, there was an explosion in home demolitions that had some real estate experts worried that the old city would soon be gone. According to a recent Oregon Live story, the city has lost a total of 3,300 single-family homes in the last 18 years, some of them dating back to the 19th century. Certain neighborhoods lost up to 5% of homes in the last two decades alone.

Demolitions or deconstructions (see the next section to learn the difference) are most common among homes built in Portland’s mid-century boom years. The city saw its greatest period of economic growth in the 1930s, 40s, 50s and 60s, and this was also the time when the suburbs were hot. Everyone wanted a single-family home rather than an inner-city apartment. Housing was easy to build because of the abundance of available land and resources.

Southeast Portland received the bulk of these homes, and it’s still the area of town where the some of the highest-density neighborhoods in Portland can be found. In more recent years, most new housing in Portland has been in the form of apartment buildings; today, out of 250,000 total housing units in the city, only 60% are single-family homes.

That percentage might have been a little higher a decade or two ago. Many homes that have been demolished to make way for new residents — Portland has added 56,000 since 2010 — were replaced by apartment buildings. But now, according to the latest data from the City of Portland, the rate of home demolitions has dropped conspicuously.

Beginning in 2010, the number of home demolitions in Portland had been growing each year. In 2015, they hit an all-time high of 351. But then, the demolitions began to slow down. Only 221 homes were demolished in 2017, and the 2018 data show that only 139 home demolition permits have been issued or are under review in Portland. A mere 40 demolitions have actually occurred between January and August 2018. (Data from Portland Demolition Map)

What has slowed down the demolition rate? Some would point to the outcry from homeowners, historical preservationists, and even some real estate agents (both hands raised here) who hated to see good homes taken down. Organizations like Restore Oregon pushed for rule changes, and one of their big successes was the Deconstruction Ordinance.
Adopted in 2017, this rule requires that homes built prior to 1916 be taken apart piece-by-piece so that the historic flooring, beams, tiles, etc. can be reused. In the first year, this ordinance resulted in 80 homes being deconstructed instead of demolished, according to a City of Portland report. This number does not reflect the quantity pre-1916 homes that developers decided not to touch at all, given that deconstruction is costlier and takes longer than traditional demolition.

Another rule, enacted in 2015, gave Portland neighborhoods the power to stop a proposed demolition by allowing neighbors time to band together and negotiate with developers to save a beloved house. However, according to another recent Oregon Live story, the ordinance has saved few if any homes. “In nearly all cases,” they report, “homebuilders moved ahead with demolition plans, and a few deals to save a historic home were reached outside of the process.”

Despite the decline in demolitions, Portland developers are finding land to put up new single-family homes, though not at the rate that was possible in the 50s and 60s — or even fifteen years ago. According to the Bureau of Development Services, permit applications for residential construction in Portland were up slightly in 2017, and coming in steadily this year as well.

The recent peak for new construction was in 2005, when a whopping 1300 new homes were built in Portland. After the residential real estate market crash, only 278 homes were built in 2010. Since then, however, the numbers have steadily been creeping back up — though Portland will likely never get back to pre-recession levels for a lack of available lots.

A recent story in the Portland Tribune may help explain why fulfillment of these projects is low. According to the article, unforeseen labor shortages in the construction industry, along with new tariffs on steel and other building materials, are driving up costs.

“The skilled labor shortages that trade groups were warning about before the recession have come home to roost,” the authors write, “as workers laid off during the economic downturn failed to return to the industry once the economy began ramping up again. The recent retirements of the first waves of baby boomers have exacerbated the shortage.”

Another labor shortage may be affecting new home construction in Portland: a reported lack of administrators at the Bureau of Development Services to review and approve building permits. Any delay in the developers’ timeline can add to construction costs, reducing the number of projects developers are able to take on.

The City of Portland recognizes that demographics are changing. Many of those thousands of people moving to Portland each year don’t necessarily need all of the work and commitment of a single-family home. They’re just as happy to live in a condo, ADU or apartment.

Portland’s approach to alleviating the housing crises has been to encourage infill and redevelopment of existing homes to split them into separate units. These homes are the so-called “missing middle” of the housing market, and will eventually bring Portland to more closely resemble cities like San Francisco or New York where density is high.

We are not there yet. There are still plenty of homes available in Portland, and more being built every year. If the city proper is not for you, check out our Top 5 Most Affordable Portland Suburbs of 2018.

Ready to start your home search? Maybe it’s time to reach out! We are your Portland real estate agent team, with top 1% buyer’s agents and top 1% seller’s agents ready to assist you.

Paint a Portland Home Exterior this Color – Sell for More