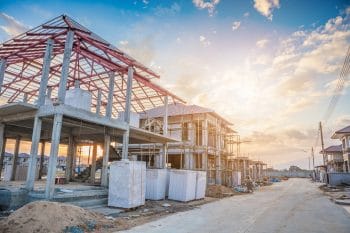 Portland’s economy is booming and our rate of commercial construction is grabbing national attention. In fact, the number of construction cranes over downtown Portland — 26 — was tied with Chicago this winter, despite the fact that Chicago (proper) has a population of 2.7 million while Portland (proper) rings in at 630,000.

It follows that if there are new commercial buildings being built and expanded, that Portland is creating jobs and bringing in new people fill them. And, in fact, we still have one of the lowest unemployment rates in the country, even with a growing population.

So, where is the residential construction to house these workers? The number of new building permits issued for single family homes in Portland has stalled again this year. Home shoppers looking for new construction homes within Portland city limits will find next to nothing. While there are areas of new home construction happening out in the ‘burbs, the lack of new housing in Portland itself is drawing the concern of prominent economists. What will it take for Portland housing to keep up with demand?

This article is looking at homes in Portland you can go out and buy, be it a condo, townhome, or single detached home. There is a huge lack of “housing” in this case, but in terms of rentals and new apartments going up for sale – new Portland residents can have their pick. In fact, apartment construction is so high, monthly rent amounts have been dropping for a while in Portland and are expected to continue to drop.

Portland’s Bureau of Development Services publishes up-to-the-minute data on the number of building permits it gives out. Maps and graphs can be accessed via portlandmaps.com/advanced. We’ve compiled the most relevant numbers here. A “finaled” permit is one that has resulted in a new home being constructed. “Under review” means the city is reviewing the application to build. “Issued” means that the city has approved the permit and the builder just needs to complete the job. In some cases, such as during the housing crash of 2008-09, many issued permits were not completed. However, in recent years it’s the rare exception that a home doesn’t get built once the permit has been issued and fees are paid.

State Economist: Lack of New Housing is an Oregon-wide Issue

As we can see from the BDS permit numbers, new home construction permit applications have remained relatively low. State economists testifying before the state’s new Senate Committee on Housing in January emphasized that it’s not just whether homes are being built — it’s whether the rate of new construction is keeping up with demand. Building 700 new homes in Portland might have been adequate at the turn of the century, but is it enough by today’s numbers?

To compare today’s new construction rates with historic ones, Oregon state economist Josh Lehner looked at the average number of new permits between 1983 and 2003. We’ll call this the “control” period because it establishes a baseline. Then he adjusted those numbers for population growth. Comparing these numbers with the new construction happening today, he found that new construction is lagging statewide. Specifically,

These numbers are troubling, Lehner emphasized in a recent blog post. The lack of new housing, along with high home prices overall, could have a long-term negative impact on the economy — in Portland and in all of Oregon.

Will the situation change anytime soon?

It’s not just the Oregon Senate worried about the lack of new home construction in Portland. Business leaders are also concerned about the impact on the ability for housing to support growth. To address some of these concerns, John Tapogna, head of the economic consulting firm ECONorthwest, gave a presentation to the Portland Business Alliance in February 2019. He highlighted some of the trends in residential new construction that concern him as an economist:

To explain the lack of new housing, ECONorthwest points to the increase in construction costs over the past few years. However, as we’ve written about on this real estate blog, the problem is more widespread than that. Contributing factors to the lack of new construction include:

Buying a New Home in Portland

Don’t despair – if you have your heart set on a new home somewhere in the Portland area, our real estate buyers’ team can help you out. Give us a call, or check out our blog posts on new condos and construction happening across the Portland metro.