No Portland Homes for Rent, Only Apartments 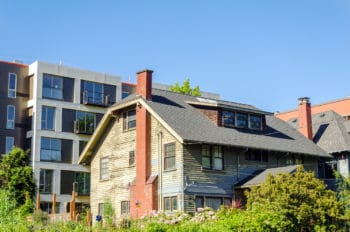 As a licensed real estate agent serving the greater Portland metro area since 2003, my practice, like most agents serving the area, involves representing home buyers and sellers in the real estate market. (If you’re looking for a rental, it is best to lookup property management companies in the area you want to live in.) However, I’ve helped numerous landlords sell their rentals or purchase new ones and so have become very familiar with the ups and downs of the Portland rental market.

One of the local trends I’ve felt over the past few years is the ongoing disappearance of detached homes available for rent in Portland. Recently, new research reports have confirmed this trend.

It isn’t uncommon these days for people in the Portland metro area to be looking for housing, attempting to escape rising rents. This is true across the board with all types of rental housing being affected.

But what about detached single family rentals specifically?

Relying on data in a report from ECONorthwest gathered by the Regional Land Information System (RLIS), repeated annually from 2015-2020 (the most recent data available), we took a look at the numbers that focused on both the City of Portland and the greater Portland metro area. This includes Multnomah, Washington, Clark, and Clackamas counties and the cities that lie within their boundaries. The report looks at detached single family rental properties within these areas noting supply trends during this five-year period, after the implementation of recent new rental housing laws.

The study found that between 2015-2020 the number of single family detached rentals in both the City of Portland and the Portland metro area combined have decreased significantly.

The report also looks at how much of the Portland area’s rental inventory consists of single family homes. Based on their findings and shown in the graph below, we can see how that number has also decreased since 2015: In Portland proper, there’s been a 4.7% decrease, with an even great decrease of 6% since 2016.

Curious how your neighborhood has been affected? Wondering about a neighborhood where you want to live? The map below shows how individual Portland neighborhoods and surrounding areas have been impacted by single family rental inventory losses.

Portland’s New Policies to Help Renters May Have Backfired

According to a recent article by Pamplin Media Group, Portland’s recent policies to help renters may have “backfired,” putting a strain on the rental housing market.

Citing the results of the most recent above-mentioned ECONorthwest report (a revision on March 25 after errors were discovered in the original one on March 15), the article addresses the widespread diminished detached rental inventory across the region. Per the report, they note that 90% of tracts in the Portland metro area have fewer available rental units than in 2014, with a concentration of these losses in neighborhoods having lower home prices.

Due to the COVID pandemic and ensuing supply chain and skilled labor shortages, housing development has slowed way down. Some also posit that the inclusionary zoning policy adopted in 2017 by Portland’s City Council, which states that buildings over 20 units must reserve 20% of them for affordable housing are to blame. The reason: the policy, along with the pandemic-related results, has caused some developers to take a wait-and-see attitude, slowing the development of new projects.

According to RentCafe, a typical 755 sq. ft. apartment in Portland currently goes for around $1,680. They also show that owner-occupied and rental properties are almost half-and-half in Portland, with rental increases in Portland compared to national averages as depicted below.

When we look at individual neighborhoods throughout Portland, we can see how the numbers break down even further.

After a staggering 55% drop in new apartment construction during the pandemic—the biggest drop in over a decade—CoStar, a commercial real estate data company, reported 4,800 apartment units under construction across all four Portland metro counties. That’s a significant decline since the beginning of 2020 when the number was right around 12,000.

All this said, though, experts believe that we’re nearing a point of stabilization, as seen in the graph below.

As Michael Wilkerson of ECONorthwest says, “We’re basically starting a new cycle,” meaning that we’ll likely start to see an upswing in rental availability, at least in the apartment category.

While we don’t assist renters in finding their next place, we have helped numerous first time home buyers purchase their first homes. Our top 1% buyer’s agents are well-versed in real estate across the Portland metro area, and we’d love to talk with you about homeownership.

Best Colors to Paint Your Home to Increase Home Value 2022