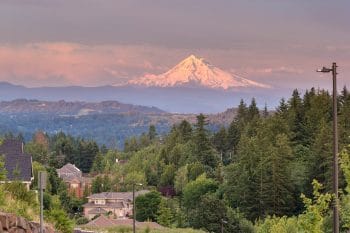 Clackamas County is a mostly rural county that begins where Southeast Portland leaves off. Generally speaking, Clackamas encompasses the area east of the I5, with its northern border running in a straight line from Milwaukie to Mt. Hood. Oregon City is the county seat of Clackamas, and its claim to fame is that it was the End of the Oregon Trail and the first incorporated city west of the Mississippi River (1844).

There are three major rivers in Clackamas County: The Willamette River, the Sandy River and the Tualatin River. With dozens of smaller rivers and creeks draining the Cascade Mountains, Clackamas could be considered a river-lover’s paradise!

With over 1,800 square miles in land area, Clackamas is the largest county in the Portland metro region, and nearly 5 times as large as Multnomah County! Most of the county is not urban, it is vast amounts of forested and mountainous land around Mt. Hood and down toward Mt. Jefferson.

Agriculture, timber, manufacturing and commerce have long been the standbys of Clackamas’ economy, but in the 21st century more jobs have become available in healthcare, business services and technology. Its unemployment rate is significantly less than Multnomah County’s: 10.7% vs 13.4% as of June 2020.

It all depends on what you’re looking for! Clackamas County has a little bit of everything: Big cities, small towns and rural areas where your nearest neighbor is miles away. In fact, Clackamas is the only county in Oregon that also designates Hamlets, or small communities that aren’t quite cities but possess a local government.

Overall, Zillow describes the Clackamas real estate market as “Warm” (as of August 2020) with more buyers than sellers and a median home value of $459,305. That’s about 10K shy of Portland’s median value. Clackamas County homes have gained 1.8% in value over the past year.

Known as Oregon’s boomtown, Happy Valley has grown 46% since 2010 and continues to add new housing for those who enjoy life just on the edge of Portland. Happy Valley also earned the distinction in 2019 for being Oregon’s #7 most educated city, with 55% of the population holding a Bachelor’s degree or higher. It’s a well thought-out suburb with trees and hiking trails, but convenient for commuters too.

This small town of just 3,700 was #4 on our list of Most Affordable Suburbs of Portland in 2020. Perfect for those who only need occasional access to the city, Estacada is in prime farmland and minutes away from Mt. Hood National Forest and the Clackamas River canyon.

The 37,000 residents of Oregon City enjoy life at the confluence of two rivers, with an award-winning historic downtown. Abundant outdoor recreation opportunities and a diverse economy centered around government, healthcare and manufacturing has established Oregon City as a regional hub for business. Check out our full article on Ten Things You Didn’t Know about Oregon City here on our blog.