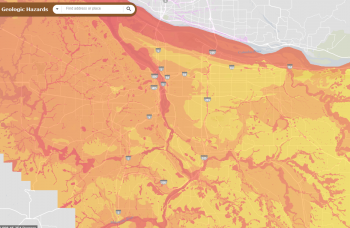 Yes, there is a certain amount of earthquake risk in Portland, but the good news is that geologists are getting better and better at understanding, mapping and even predicting seismic activity. Maps can also help us be better prepared for disasters by showing were resources and hazards are. Take a look at these Portland maps before you buy a home.

The Top 5 Portland Earthquake Maps of 2020

(Click the header links to go to the earthquake maps.) For those fascinated by seismic activity, this live US Geological Survey map provides up-to-the-minute information about earthquakes happening around the globe. Earthquakes appear as dots on the map; the colors indicate how long ago they happened. The map can show a history of all earthquakes for the past thirty days. Beyond that, and there would be too much data for most home computers to display! It’s a good reminder that earthquakes are happening all the time, around the world. In fact, Portland lies just at the edge of the Pacific rim, a very lively earthquake zone.

This map shows where earthquakes are likely to occur around the world. From a distance, California appears to be one solid fault line, but Oregon has a few, too. Zoom in on Portland to see the fault line that runs from Lake Oswego to Northwest Portland! Quaternary Faults are those that appeared less than 1.6 million years ago — recently, in geologic time. And yes, while that Portland fault is technically an active one, geologic time offers some comfort here: An active fault is one that has had movement in the past 10,000 years.

The Latest Earthquakes map and Faults maps are interesting, but they don’t actually show what the hazard is for an earthquake occurring in any given area. According to USGS, “Earthquake hazard is anything associated with an earthquake that may affect the normal activities of people. This includes surface faulting, ground shaking, landslide, liquefaction, tectonic deformation, tsunamis, and seiches [a type of standing wave that occurs in closed bodies of water].”

To learn about earthquakes that can (and will, eventually) happen in Portland – as well as other geologic hazards like landslides – our real estate agents turn to the Portland Geologic Hazards Map, created by the city’s Bureau of Planning and Sustainability. This map shows two major types of information:

This is another map by the Bureau of Planning and Sustainability. It shows all the buildings in Portland that could be dangerous when the ground starts shaking. Unreinforced Masonry Buildings, or URMs, are made of bricks or cinderblocks that are held together by mortar, which crumbles easily under seismic stress. Newer masonry buildings in Portland are reinforced by steel and bolted to their foundations; those built before 1960 were not. According to the City of Portland, “URMs are more prone to sustain significant damage, which may include partial or total collapse, during seismic events”. Knowing where URMs are in the city of Portland is important for residents and visitors alike — they are not places where you want to be when an earthquake hits!

But what is “liquefaction”? Good question. When soil or sand is saturated by water and subject to the kind of shaking that happens in an earthquake, it starts acting like a fluid. Think of when you stand on the beach in wet sand and wiggle your feet. That’s not an easy substance for a building to stand on, especially when the walls are not reinforced.

Fortunately, most homes in Portland are not built from unreinforced masonry; in fact, most Portland homes are made from wood, which is very earthquake resistant. Still, many of those homes were built before seismic standards were put in place (in 1993), and could slide off their foundations event of an earthquake. The good news is that homes can be retrofitted to be more resilient to earthquakes. Read more here on our blog.

5. Your Own Neighborhood Earthquake Map

There’s yet another type of earthquake map out there, but this one doesn’t rely on geological information. We’re talking about a DIY map that shows vital information about resources and risks at the neighborhood level. The Map Your Neighborhood program is a grassroots effort to help Portland be more prepared for disaster.

Neighborhood Emergency Teams (NETs) are usually the people who create these maps, and they aren’t published online for privacy reasons. Portland’s NETs are made of volunteers who have gone through a training program designed by FEMA. They meet regularly and participate in simulations to be prepared for disasters like earthquakes.

Map Your Neighborhood is a way to identify things that need to be found quickly in case of an earthquake, such as gas shut-off valves, or special hazards like URMs. These maps also show which neighbors have special needs and might not be able to help themselves in the event of an emergency.