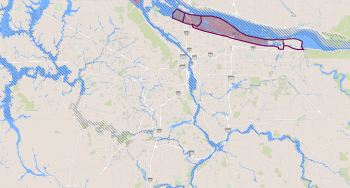 Climate change, winter storms, questionable levees — the average home shopper has many good reasons to consider Portland flood risk before they buy. Your buyers’ real estate agent is a great resource, and should have information on hand about what the flood risk is for a home that you’re interested in.

For those who prefer the DIY approach, Portland flood maps available online allow you to check the potential for flooding at any given address. The maps we use most often in our real estate office are the Portland Flood Hazard Map and the FEMA map:

The City of Portland has an impressive collection of online maps that allow the average person to find out just about anything about a given location in Portland. At PortlandMaps.com/advanced, you’ll find the Flood Hazard map under the “Natural Hazards” category.

When you first enter the map, some purple- and blue-marked areas immediately jump out. So what do they mean?

These areas are layers in the map, and they are labeled under the “Layers” button (looks like a stack of white paper). Here’s what those layers represent:

For those wanting to do more in-depth research before purchasing a piece of Portland real estate, FEMA also has an online system that produces localized maps with detailed flood risk layers. These maps are not as straightforward to read, but generally, lighter areas indicate less flood risk, while darker areas indicate that the flood risk is higher.

The good news is that searching the site and generating a flood map is simple. Simply enter the address you’re curious about in the search bar. Or, enter “Portland, Oregon” for an overview of the area.

Best Time to Sell a House in Portland – 2020 Update