Portland Real Estate Added to the Historic Registry in 2022 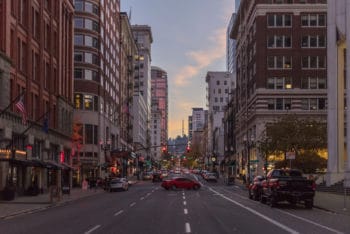 Each year the National Register of Historic Places adds to their list of buildings, sites, structures, objects, and districts across the country to mark them for preservation in the interest of honoring the past and maintaining historical integrity.

The Registry’s cut-off for eligibility is 50 years, so this means anything built or created from 1972 on is a prime candidate. Of course, there are other requirements than simply age that make a site, area, or building eligible. Properties submitted for consideration through a public nomination process must also be well-preserved, show architectural distinction, and have an important association with events, people, and trends in history.

Portland is brimming with Registry listings, and over the past year, five more were added to the already-long list, three of which have a focus on diversity.

Built in 1923 and located at NE 1st Ave and Schuyler St., Mt. Olivet Baptist Church has serves as a powerful cornerstone for Portland’s Black community.

The significance of the church—at one time Oregon’s largest Black Baptist church—lies in its significance to Portland’s Black community, even during the 1920s to 1970s when urban renewal meant the displacement of hundreds of African American residents.

Not only did the church create a distinguished music ministry program that included public African American gospel music performances and spirituals, but it also created and hosted important social programs. Youth and church club activities and programs, community health gatherings, and talks by high-profile Baptist leaders and public figures, including political figures and civil rights leaders and activists, were all part of Mt. Olivet’s mission to encourage fellowship within the congregation and community at large. For example, in 1924, the church hosted orator and political activist Marcus Garvey, leader of the Universal Negro Improvement Association and the Back to Africa movement. A controversial figure, he was revered for his work to elicit pride in Africans even when facing discrimination, colonialism, and rampant poverty.

While Mt. Olivet’s congregation was moved to a larger space in 1994 on N. Chautauqua Blvd., the original structure is now home to The Well Community Church.

Dean’s Beauty Salon and Barber Shop was conceived and designed in 1954, and built in 1956 at 215 NE Hancock St. in Portland. It’s one of the few black-owned Portland businesses to remain despite the city’s gentrification, urban renewal, and disinvestment activities in lower Albina, which began in the 1960s.

Dean’s was founded by Benjamin and Mary “Rose” Dean from Birmingham, Alabama. After growing up at Dean’s, Kim Brown, granddaughter to Benjamin and Mary, now runs the family business. She says her grandparents intention in starting the business was to ensure generational wealth.

While the business has served as a hub of stability for the Dean family, the salon and barber shop holds great importance in Portland’s historic landscape. It makes visible the African American culture’s hair care industry, as well as its historic representation of African American entrepreneurship. The location has also been a meaningful gathering spot for the Black community where they can enjoy camaraderie and network to find work and trade services.

Another focal point in Portland’s early Black history was the Golden West Hotel. In fact, the hotel served almost exclusively to Black guests in the early 1900s. While disregarded by most Portlanders at the time, it was one of the country’s biggest, most extravagant, Black-operated hotels in its heyday.

Golden West’s significance in Portland’s history is that it was one of the only places in the city where Black railroad workers could find lodging during layovers. Not only did the railroad not provide accommodations for their Black employees, neither did most hotels.

The man behind Golden West’s beginnings was William Duncan Allen, a Nashville native. Allen first owned a cafe in the area. The hotel, originally called Tremont House, was designed and built by white developers almost ten years before Allen became its operator. When the hotel went under due to a financial crisis, Allen noted its close proximity to Union Station and found a way to run it, paving the way for Black-friendly lodging.

The hotel’s lobby became a popular gathering place for Black families every Sunday after attending church services. As Kimberly Moreland, owner of Moreland Resource Consulting, says, William Duncan Allen provided “entertainment and a social life for African Americans who otherwise were not allowed.”

In 1943, the hotel became the Broadmoor Hotel and transformed to a low-cost housing development. It remains so to this day. However, its name has reverted back to the Golden West and is operated by Central City Concern, a local nonprofit.

Portland’s South Park Blocks is a twelve-block city park in downtown. The park sits in the center of the Portland State University and has been deemed the “the heart of the city’s cultural life” by the New York Times and the city’s “extended family room” by The Oregonian (as it relates to Pioneer Courthouse Square, known as Portland’s “living room”). The park contains 337 deciduous trees of the elm, oak, and maple varieties, as well as roses.

The 8.76-acre, city-owned space reflects the pedestrian mall concept popularized in the 1950s-1970s. Nestled within urban buildings and venues, the park was originally conceived and initiated by Daniel H. Lownsdale and formally designed in the 1870s by Louis G. Pfunder, a Portland horticulturist.

When strolling through the park, you’ll find featured artwork in each block. In addition to the Shemanski Fountain, are Holon, by Oregon sculptor Donald Wilson: Holon, meaning a thing of integrity that can stand on its own, complete in all its parts, and is simultaneously part of something larger; Farewell to Orpheus; a 1973 bronze statue and fountain by Frederic Littman; In the Shadow of the Elm, a 1984 sculpture by Paul Sutinen; a 1984 granite memorial sculpture by Steve Gillman; a 1922 bronze sculpture titled Theodore Roosevelt, Rough Rider, by American artist Alexander Phimister Proctor; and a statue of Abraham Lincoln.

As noted by Portland.gov, the South Park Blocks close proximity to the Native American Student and Community Center (NASCC) at Portland State University provides a great opportunity to reconnect to Native American history and “weave these stories and cultural practices into the urban park.”

Today, the South Park Blocks is a venue for the weekly Shemanski Farmers Market and many other public events and programs for residents and visitors throughout the year.

Learn more about the history and features of Portland’s South Park Blocks here and here.

Last, but certainly not least, The Oregon Trail made its way onto the Registry list after all this time. The historic trail contributed to the country’s westward expansion beyond the Mississippi River, and especially after the Louisiana Purchase in 1803. At that time, Oregon Country, as it was called then and encompassed Washington and some of Idaho, was wilderness and home to the Native Americans who worked and lived on the land.

The Lewis and Clark Expedition was intended to open up settlement by European whites in the area but the government thought the journey here was too treacherous. In 1810, Robert Stuart was the first person to traverse what would become the Oregon Trail, considered a far more achievable route for wagon travel. Heading back toward the east, Stuart made the 10-month, 2,000-mile trek from Astoria, Oregon to St. Louis, Missouri, and the Oregon Trail was born.

The trail’s significance, of course, is that it brought thousands of emigrants to the Pacific Northwest for two decades in the mid 1800s. Prior to the droves of people who made their way to Oregon and helped settle the area, it was owned by the British. Once seeing that the area had been overtaken, they ceded to the U.S.

The end of the Oregon Trail is located in Oregon City, which has an Interpretive Center that offers interactive exhibits depicting mid-1800s life.