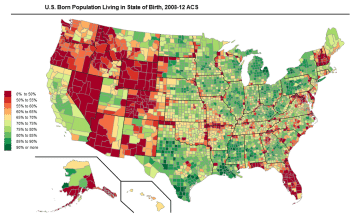 The Oregon real estate news sites have been abuzz with renewed angst from Portlanders about the migration of Californians to Oregon’s biggest metro area. From writing angry comments below news articles to actually slapping “no Californians” stickers on real estate agents’ for-sale signs, some people are really having a hard time accepting that someone from out-of-state might come buy a home in Portland. They are concerned that out of state buyers will continue to raise real estate market prices in Portland and decrease home affordability and availability. While home affordability and availability is an important and relevant issue, migration has a significant impact on the entire Oregon economy and affects far more than the Portland real estate market.

Change is hard for everyone, but the truth is, Portland should be welcoming migrants — from California or elsewhere — with open arms, according to a recent blog post published by the Oregon Office of Economic Analysis.

“Migration is vital to Oregon’s economic health,” writes senior economist Josh Lehner. “It is one of the reasons Oregon outperforms the typical state during an economic expansion.” In other words, when the US economy does well, Oregon’s does even better, thanks to our industrial infrastructure that allows jobs to be formed, and the influx of trained workers (“brain gain”) and retirees (who can provide a cash infusion) to the state.

A strong economy is just one of the reasons people are moving to Oregon. Recently I discovered the AARP’s livability index website, which breaks down key factors of livability for a given metro area into easy-to-compare numbers. Using this great tool, I discovered the following factors that might also be driving healthy migration from California to Oregon.

– Average cost of housing: Portland $1,281/month; San Diego $1,705/month; San Francisco $1,787 per month. The average Portlander spends 21.4% of their income on housing, whether that’s a mortgage or rent. Out of the three metro areas, we come closest to the national average is 18.4%.
– Air quality: San Franciso and Portland both showed an average of 2.3 days per year when the air quality was considered unhealthy. San Diego has a whopping 18, and the national average is 8.
– Civic engagement: How many opportunities to engage through civic, social, religious, political, and business organizations? Portland scores high with 9.3 organizations per 10,000 residents; San Francisco follows with 7.1 and San Diego falls behind with 4.4. The median for US neighborhoods is 7.3.
– Health care is important to everyone, and for overall quality Portland leads the pack once again. 73% of patients said they were satisfied with the quality of care at their local Portland hospitals, while San Franciscans gave a 72% approval rating for theirs. – San Diego is only leaving 57% of patients satisfied with the quality of their hospitals. That’s ten percentage points lower than the national median of 67%.
– Finally, the AARP’s overall livability score for the three metro areas I compared: San Francisco 66; Portland 61; and San Diego 53.

These numbers — along with the IRS data cited by the Oregon Office of Economic Analysis — indicate that not as much migration is happening from the San Francisco Bay area to Portland as many are assuming. With comparable livability scores between both cities (outside of the outrageous housing costs in SF), there doesn’t seem to be much incentive for people to move. On the other hand, those coming from Southern California can experience a far greater quality of life in the Portland area.

Are you one of those migrants? Don’t let a few grumpy Portlanders put you off. Contact our friendly buyers’ team for high quality real estate representation – now that’s something we can all live with.