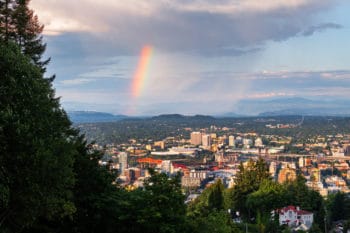 The continuing real estate topic at the forefront of everyone’s focus is the shortage of single-family homes. And not just in Portland, but across the entire country. Demand will likely remain high (at least for single family detached homes) while the real estate market slows down. New construction has slowed significantly for both single-family and multi-family housing, due to supply chain issues and a shortage of laborers (and more recently due to increased borrowing costs).

Curious about what Portland’s housing supply will look like in the future? How single-family homes and multiple unit dwellings will shake out? And what about homeowners versus renters?

We reviewed the numbers from the past decade, the current numbers, and new legislation to see what we could learn about the potential housing futures of Portland residents.

Average Age of a Home in Portland

In Portland, 35% of the city’s housing was built before 1940, with another 10% being added between 1940-50. The same trend continued for the next four decades, according to the 2011 Amendment to the Housing Supply Analysis (HSA) report.

By the 1990s, nearly all of Multnomah County had been incorporated into Portland and Gresham, the last sizable portion of buildable land. After this, growth slowed down. Portland added 15% of its total housing stock between 1980-2000. Since then, only 6% of new housing supply has been added, with most new construction in Portland being apartment complexes rather than single-family homes.

Portland has been in a holding pattern since the pandemic, and construction has slowed even more. That said, though, there’s potential for more in the form of a new single family subdivision proposed at the old Alpenrose Dairy location and the recent approval of more legally allowable ADUs throughout the city.

Many of the homes we see on the market in Portland today were built during the 1930s, 40s, and 50s. Some can pass for new builds due to the large percentage of them with extensive updates and renovations. In general, these homes were well-constructed but might need some extra attention to achieve a better Home Energy Score, something now required for all Portland homes that get listed, no matter their age.

Where the Single-Family Homes are in Portland

How Portland’s Housing Profile is Changing

The degree of homeownership in a neighborhood can indicate its level of stability. Historically, Portland has had fewer homeowners than the national average.

According to the in-depth 2020 State of Housing Report put out by the Portland Housing Bureau, ownership decreased slightly from 53.4% in 2013 to 53.1% in 2018. Rentership increased slightly from 46.6 percent in 2013 to 46.9 percent in 2018. This indicates that Portland could be moving toward an even split between homeowner households and renter households.

Of course, this is a big picture view of the entire city, with each neighborhood having its own owner/renter ratio, some with numbers above national averages.

Where the Housing Supply Stands, U.S. vs. Portland and Apartments vs. Homes

When did a breakdown of the configuration of all housing units across the country and compared them to Portland.

According to information from the U.S. Census Bureau, taken from the Survey of Construction, funded in part by the Department of Housing and Urban Development (HUD), the following national data was collected for 2021.

The U.S. Census Bureau also reported that a total of 371,000 multi-family units were competed nationally in 2021 with a breakdown as follows.

Learn more about the breakdowns across the country for single-family and multi-family construction numbers with year-to-date comparisons for 2021 and 2022.

We looked at the numbers for new construction permits in Portland for 2021 and the first half of 2022. We appear to be on track to at least duplicate the numbers we saw in 2021.

For multi-family new construction permits in Portland, at half-way through the year, we’re on track to match the number under review from 2021 and close to that with issued permits. But so far, finaled projects right now are at about a third of what we saw in 2021.

Changes in the Portland Housing Supply

To gain even more perspective on Portland’s current housing situation, it helps to look back to a time when the city was booming with new construction.

Based on data from the SHR, building permitting and production peaked in 2017 and hit an historic high. At that time, the city granted over 6,000 permits and builders turned out 8,000 units. Following this apex, both permitting and production started to decline in 2018. Because permitting exceeded production levels that year, additional growth came in 2019 when the previously approved permitted projects were carried out. Multi-family construction decreased to 2,343 units that year. For single-family homes, 693 permits were granted with 546 units produced.

How Renovations Change the Face of Portland’s Neighborhood Housing Profiles

Most of Portland’s housing demands are for smaller amounts of people per household. This means that many larger, already-existing homes can be converted to multiplexes, increasing the city’s number of available housing units. Portland’s zoning and housing codes have been updated recently to allow for such renovations (see below).

With a growing population of 641,162, as of the most recent U.S. Census report, Portland needs more housing. Strides are being made to manage Portland’s housing issues by way of legislation.

With all the strife and struggles Portland has seen over the past couple of years, some are writing the city off as unfixable. But many others aren’t buying the gloom and doom scenario. In fact, we stand to see a few new apartment complexes cropping up within the city’s boundaries.

One is a proposed new 337-unit complex in the Pearl District at the corner of NW 9th and Hoyt. Another is the proposed Zeal Lofts at NW 23rd and Marshall, as well as a 266-unit building in the South Waterfront District.

Also, according to the June, 2022 update from Portland’s Bureau of Planning and Sustainability, an update to RIP1, RIP2 allows for an even greater expansion of the original plan, for “attached houses and cottage clusters across all neighborhoods,” effective June 30, 2022.

Given this, some people might be concerned about Portland becoming overbuilt with structures that will diminish the charm of the city. But the City of Portland is committed to an aesthetic that maintains its historic character and beauty.

Take a look at the Craftsman homes below, all now currently on the market, and see what we mean. Can you tell which are new, old, or renovated at a glance?

Portland is facing some housing challenges and going through some changes, yes. But that doesn’t mean they aren’t solvable. According to the 2021 Regional Housing Needs Analysis Report, the city will need 583,600 new dwelling units between 2020 and 2040. It’s possible to meet these needs and maintain and embellish the city’s aesthetic charm at the same time, but it is a real challenge.

Get in touch today with our top 1% seller’s agents or our top 1% buyer’s agents. After almost twenty years in the real estate business in the Portland metro area, we know this city inside and out. Tell us what you’re looking for, and we can help you find it. Call us today or chat with the bot on this site. We’d love to get your journey started.