Starting 2021, a Six Plex can be built next to any Portland Home. 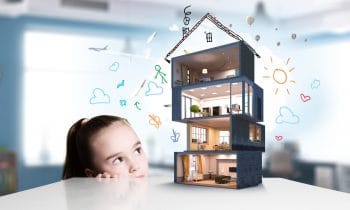 Travel back in time to Portland 150 years ago, and you’d see a housing mix that is different from today’s suburban, single-family-home-dominated neighborhoods. There were garden houses, rowhouses, courtyard apartments and cottages. Density was higher, and nobody needed parking because they used the Portland streetcar to get around (plus cars hadn’t been invented).

This vision has inspired a piece of legislation five years in the making: the Residential Infill Project. The goal of RIP, as it is known around Portland, is to reconstruct that higher-density time in Portland’s housing mix, in a contemporary way. The idea isn’t to strip away all zoning rules and create a housing free-for-all. In fact, RIP received a record-setting 15,000 public comments as it moved through the legislative channels, and the result is a 300-page book of zoning codes that is being widely hailed as a housing solution that works for everyone — homeowners, home buyers, and real estate developers.

In August 2020, Portland city council gave the final approval to the RIP ordinance, and the new rules go into effect in August 2021. In this blog post, we take a closer look at what is and isn’t allowed under RIP, who it will effect, and how the real estate market might be impacted.

Why RIP, Why Now?

Portland, like most major US cities, has a major need for more housing:

A Closer Look at the New Portland Zoning Rules

Portland’s Residential Infill Project was recently called the “best low-density zoning reform in US history” by the Sightline Institute, a progressive think tank. Because single-family housing is typically low density, it’s also been called “the end of single-family zoning”.

That startling headline is true, but the RIP doesn’t ban single-family homes. It does open up zoning restrictions to allow multi-family units to be built in neighborhoods that were previously single-family only. It also decreases the maximum allowable square footage for new construction. Finally, it requires a certain number of units to be affordable to low-income Portlanders.

Up to Six Units per Lot in Portland – New Zoning Law

Under the old zoning rules, only one home could be built on a lot, with one Accessory Dwelling Unit, either attached or detached (for much of the city’s residential zoning areas, depending on lot size). RIP’s objective is to allow the “missing middle” of housing to be built — multiple homes sharing single-family lots, accommodating smaller households, which are on the rise in Portland. The new building configurations allowed under RIP are:

The new rules will cover nearly 100% of Portland, with few exceptions. Check out the residential infill project map here, you can see how it will affect any Portland address.

Another major rule change included in the RIP is to decrease the maximum allowed square footage for a single-family home, from 6,750 square feet to 2,500 square feet max. That sounds like a big drop, but the average square footage for a new home in Oregon is just 1,780. And most Portland homes were built between 1940-60, when home sizes averaged between 900 and 1200 square feet! For more about home sizes and Portland real estate, check out our blog post here.

Other changes created by RIP

Will developers jump on the opportunities to create new housing types in Portland? If they do, it won’t be overnight. First lots must become available, and if there’s an existing home on the lot that needs to be torn down, demolition is a costly endeavor.

However, we do expect Portland homeowners to add more ADUs, which don’t require anything to be torn down and can pay for themselves within a decade. This is a fantastic option to provide more housing and to create wealth for families and individual homeowners.

Because no city has ever passed an ordinance quite like RIP (even Minneapolis’ headline-grabbing policies don’t go as far to encourage infill), nobody can quite say what will happen next. Maybe infill, combined with new development on the outer edges of the metro area and slowing population growth, will finally take some of the pressure off the Portland real estate housing market. On the other hand, in a city where home values have climbed every year since 2012, it will take a lot to cool things down.

Do you need a local expert on the Portland real estate market to answer your questions? Our top 1% Portland seller’s agent and buyer’s agents are just a phone call or email away.