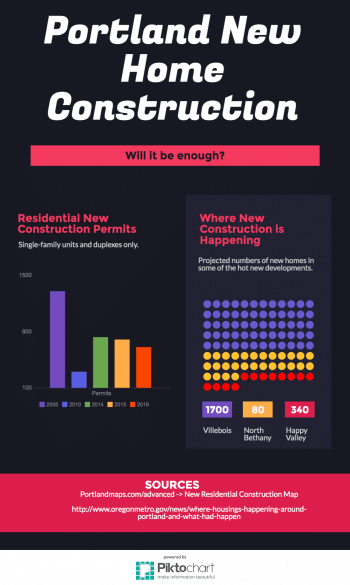 Portlandmaps.com has issued some new maps that make it easy to sift through the data.

You would think that with all of the demand for housing in Portland, new construction would be happening like crazy. When I pulled up the new residential construction map, however, I was a bit disappointed. Let’s take a look at what’s happening in the Portland housing scene.

Demand Higher Than Ever

By now, everyone knows the story – the Portland housing market is hot.
How hot? According to United Van Lines, Oregon has been the number-one moving destination in the United States for the past three years. Metro, Portland’s regional planning agency, also tracks housing and population trends for the region. They reported that in 2015, we added more than 100 residents per day.

In addition to all of the cultural and natural offerings of Portland, the city’s strong economy is a huge part of its continued appeal. Our strong manufacturing base might just see Portland through whatever economic challenges come next. But can housing keep up?

To keep an economy strong, workers need places to live. While existing homes, apartments, condos, etc. can house some people who want to live in Portland, there’s definitely pressure for more housing. New construction is one of the primary ways for a city to add to the inventory of places to live.

To measure new construction, most cities go by the number of building permits applied for and issued. Because all new home construction requires a building permit, it’s a pretty good way to estimate how many homes are being built. It’s not perfect, though, as we’ll see in a minute.
Portlandmaps.com’s New Residential Construction Map shows where those permits are being issued – in neighborhoods across Portland. There’s also a handy feature that shows the volume of permits over time. That’s where I stumbled across this fascinating bit of data.
So far this year, 606 building permits have been issued or are under review. A small percentage of those (7.1%, to be exact) have been “finalized”, meaning that the home has already been built.
For the past two years that number has been around 700. Prior to that, we were climbing out of our recession lull, from just under 300 new homes constructed in 2010. Compare that to 2005, when a whopping 1,300 new homes were constructed in Portland!

Why is New Home Construction Slow?

At first, I didn’t like how this data looked. Fewer new homes were permitted in 2016 than in 2015, which was even less than 2014! If so many people want to live in Portland, why aren’t more new homes being built?
There seems to be a gap in the local media coverage about this issue. However, as a real estate agent, I have a few observations to contribute:

Where the New Homes Are

Are you interested in buying a newly constructed home in Portland? The map shows the dispersion of new homes to be pretty even across the metro area, but there are definitely heavier concentrations at the outskirts, and even outside the city limits. Metro has recently published a helpful report on some of the larger new developments:

Interested in a new home in the Portland area? Want to talk about housing availability? Call your local real estate market experts.