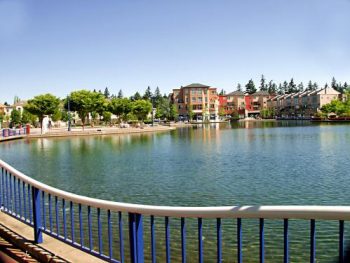 According to the Oregon Historical Society, the name of the city of Tualatin, Oregon comes from an Atfalati (the region’s Native American tribe) word meaning “lazy” or “sluggish”. No offense!

That word was meant to describe the Tualatin River, which flows along the northern boundary of the city. It certainly could not be applied to the real estate market in this booming Portland suburb!

According to reports recently released by the major moving van companies, Tualatin is one of the fastest growing medium-sized cities in the country. And with a proposed new light rail project offering the possibility of quick and convenient transportation to downtown Portland, real estate here is just going to get more attractive.

Many Portland residents know Tualatin as the home of Bridgeport Village, a unique European-style outdoor mall. It’s a popular shopping destination only half an hour southwest of Portland along the I-5 corridor.

Locals know Tualatin as a quiet town with great schools and a picturesque city center known as Tualatin Commons. Niche.com ranks it the 7th healthiest city in Oregon, and a report card score of A overall! Portland, by the way, is only 23rd healthiest city, but it also scores an A on the overall report card.

Tualatin is nestled in the northwest corner of Washington county. An estimated 27,000 people live here, and many of them are families. Tualatin School District boasts some of the best schools in the state, and residents here are more likely to be college educated compared to national averages. Crime rates are lower than the national average.

With the Tualatin River nearby, and the mountains and the ocean both within a couple hours’ drive, Tualatin is celebrated as a nature lover’s city. Another favorite spot is Tualatin Commons, a thoughtful center feature to the city.

Most important, however, real estate values are great in Tualatin. My clients love to come down and see some nicer homes that they might be priced out of in the Portland area. And, according to the RMLS, the total market time for Tualatin-area homes is slightly lower (51 days) than the Portland average (less than 40), meaning that the pace at which homes are moving is a little bit less extreme! Prices for the region (NW Washington County) grew 10.2% over the past year, which is a good healthy rate of growth. Portland homes rose in value between 12 and 13% in the same time period. (These numbers are all taken from the monthly RMLS Market Action report I send out, which you can subscribe to here.)

One interesting feature of Tualatin from an urban planning standpoint is the Tualatin Commons we mentioned earlier. As Tualatin began growing from a tiny rural town in 1970 to a bustling Portland bedroom community by 1980, planners decided to be proactive to prevent the city from becoming another cookie-cutter suburb.
They got together and designed a plan for the Commons, a mixed-use redevelopment around a central lake, with a plaza and promenade surrounded by offices, homes, restaurants and other businesses. It took 18 years for the city to actually procure the real estate to pull this off, but eventually the 19-acre Commons was built. Today, it is the highlight of Tualatin and a great venue for the city’s celebrations, markets, and festivals, such as the annual Crawdad festival.

The Oregonian reported last month that Tualatin is accepting moving vans at an above normal rate. According to U-Haul, Tualatin had the second highest number of people moving into homes in 2016, out of cities with a population between 10 and 50,000.

Another major mover, United Van Lines, said Oregon was the nation’s top state to move to for three years running, but was replaced by South Dakota last year. Still, Oregon came in at #3, with the vast majority of those people – potential home buyers – headed to Portland or surrounding areas.

According to the Oregonian, the state’s job market has been growing faster than in the nation overall, and this is part of what makes it a top destination. People migrate here for the jobs, and they stay here for the great communities, recreation opportunities, and yes, real estate investment opportunities, too.

Is this your year to sell your Portland or Tualatin home? With prices at least 10% more than they were a year ago, my real estate agent opinion is yes, if you’ve been thinking about selling, now would be a great time. Out of all the 20 major metro areas included in the Case-Schiller index, only Seattle saw a bigger leap than Portland.

What’s Next for Tualatin?

If a proposed Metro light rail project is approved, Tualatin could see some major changes. This former farming town would be the farthest-flung city to be connected to Portland via the MAX. Potential commute times have not been released, but even if ten minutes could be shaved off the trip from Portland to Tualatin and back, residents are likely to embrace the convenience.

Metro, the organization that oversees light rail implementation, is in the process of submitting the route to its federally-required environmental review. According to the agency,
“The proposed MAX line is not finalized. Several potential alignments remain on the table, such as whether to travel on Barbur Boulevard or Naito Parkway in South Portland, and how to connect from the Tigard Triangle to downtown Tigard. There are also other components to consider, such as locations for stations and park-and-ride lots.”

The timeline for the project’s completion is around 2025 — assuming everything gets approved by government agencies as well as metro voters. The first of those votes will likely happen in fall 2018, when Metro will ask local taxpayers to match federal funds needed to build the line.

If Tualatin planners and voters could get together to build Tualatin Commons, chances are good they will make the light rail line a success as well. Although 2025 seems a long way off, it’s not that long in real estate terms! The average length of time for most Americans to live in a home is seven years, so if you buy a home in Tualatin this year, by the time you’re ready to move out you may see a nice home value bump thanks to the new public transit feature.

Ready to buy or sell in Tualatin?
Our number one real estate team in the greater Portland metro area would love to help. Contact us anytime.