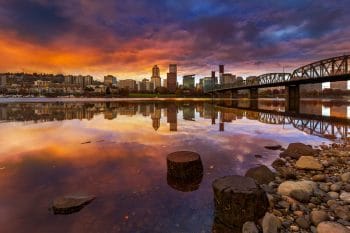 Over 9,400 homes sold in Portland in 2018, according to the RMLS, and a new analysis from Portland Monthly and geographers at Portland State University shows that most of those homes were in East Portland. The below list is based on the number of homes sold in a neighborhood last year, which means that more dense neighborhoods or those with higher populations are going to rank higher. So keep that in mind as you review the top 10 Portland neighborhoods for closed sales last year.

A lot has changed in the Portland real estate market over the past couple of years. Notably, the average number of days a home spends on the market before it is sold has gone up, from an average of 48 days in 2018 to 72 days on market in 2019 (so far). according to the RMLS. Meanwhile, the total number of homes that were sold in a 12-month period went down, from over 10,000 in 2017 to a little over 9,400 in 2018. Read our 2019 Portland real estate market forecast here.

Let’s take a look at the Portland neighborhoods that sold the most homes in 2018.

This neighborhood lies just to the south and west of Centennial, and is similar in area as well as population — around 25,400. In 2018, 303 homes were sold in PG, for an average sales price of $290,000. Powellhurst-Gilbert differs from its neighbor in the typical number days homes spend on the market here: 39 compared to Centennial’s brisk 28.

Closer-in than PG and Centennial, this neighborhood boasts the highest rate of home ownership of the Top 10 Portland neighborhoods. Of the nearly 13,000 people who live here, 67% own their own homes (average Portland homeownership rate is 54%, according to this analysis). In 2018, 284 of those homes changed hands.

Straddling the I205, this neighborhood has seen the biggest price growth of any neighborhood in the Top 10. Between 2014-18, its median sales prices ballooned 71% to a still-modest $318,500. However, the market in Lents may be adjusting: It’s falling in the rankings for total number of homes sold, from #2 in 2017.

Just up the 205 from Lents, Montavilla is the oldest Portland neighborhood in this Top 10 list, a former stopover for travelers going between Hood River and Portland. The average year built for a home in Montavilla is 1952, and in 2018, 266 were sold.

Sandwiched between Montavilla and Centennial, this quiet area features easy access to public transit, with 14 routes traveling through the neighborhood. It rounds out the list of East Portland neighborhoods that dominate the Top 10 for number of homes sold, with 262 sold in 2018. Like its neighbors, Hazelwood is affordable, with a median home sale price just under $370K, and has seen strong price increases over the past five years.

Sellwood-Moreland was one of the trendiest neighborhoods of 2018 and continues to be hot this year, but although average home prices are high — over $550K  — its five-year gain in home prices is the lowest in the Top 10, at just 28%. In 2018, 218 homes were sold in Sellwood-Moreland.

Outside of the Pearl District, St. John’s has the highest population density of any neighborhood in the Top 10. It’s the town-within-a-city on the tip of the peninsula formed by the confluence of the Willamette and Columbia rivers. No wonder it’s a hot neighborhood for two years running; #4 on the list in 2017 and 201 homes sold in 2018, with a median $360K price tag.

Older homes and shiny new high-rise condo buildings mix here on the banks of the Willamette, just south of Downtown Portland. It fact, it’s 50/50: Just over half the 195 homes sold here in 2018 were condos. However, home buyers were not rushing into anything: It took 51 days for the average South Portland home to sell. Fun fact: Thanks to its long river frontage, the South Portland neighborhood (which includes South Waterfront) has the highest percentage of park area out of any neighborhood in the top ten list: 31% (Portland averages 14%).

Ready to buy or sell in the Portland real estate market in 2019? Contact our top 1% real estate agent team today!