Top 5 Portland Maps for Sustainability and Livability in 2021 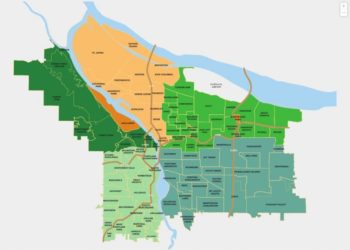 It’s not exactly a secret that Portland has been on the forefront of urban movements, now popularized, for decades. This city values the environment alongside its citizens’ enjoyment of it. From biking to hiking, from walking the neighborhood to getting out of town, Portland wants its people out there. (And its environment protected all the while.)

Unsurprisingly, Portland maps show up to the challenge! In honor of this, today we’ll look at the top 5 Portland maps that showcase our city’s dedication to livability and sustainability.

What Makes Portland a Livable City?

The question of livability is no doubt debatable and subjective. But for our purposes here, we’re looking at a few key factors. First, mobility. How easy is it to get around using different forms of transportation? Second, outdoor space. Do the available public outdoor spaces enhance a person’s experience? And third, neighborhood identity. Are there neighborhoods with fully fleshed out cultures and strong local economies?

What Makes Portland a Sustainable City?

Well, this is one Portland has down over many other cities for sure. But sustainability is a complicated issue with many factors involved. Today, we’re really looking at how Portland makes sustainable choices available to its citizens. Whether we’re talking bike lanes or just a nice walk in the park, Portland has so much to offer to keep at least this little corner of the world green.

Accordingly, we think the maps below will showcase how Portland chooses to offer folks both livability and sustainability. Check them out to see what a great place to live Portland can be!

With 162 miles of bike lanes, not including separate bike paths, Portland regularly ranks among the most bike friendly cities in the US. And a ton of Portlanders commute on their bikes – well above the national average. In 2017, the Portland Bureau of Transportation officially launched the first fully interactive bike map for Portland on its website. This map makes a fantastic resource for cyclists. Whether you want to go for a ride on your day off or regularly commute to work, the map provides all the information to prepare you for your trip.

The detailed and color-coded map tells you more than just where bike lanes exist. It also lists Neighborhood Greenways (streets where bike traffic is prioritized over car traffic), stretched of buffered bike lanes, and various degrees of shared roadways. If you don’t think this is enough, check out the feature that will warn you of difficult connections and intersections. There’s even something they term a “layer list,” which allows you to select or deselect certain aspects of the map. For example, you might choose to add on bike shops – just in case you need a little maintenance.

Biking not your thing? We get it, it isn’t for everyone. Especially if you just feel attached the the sensation of your hands on the steering wheel.

Luckily, PortlandMaps.com can help you keep the car and ditch some of the environmental guilt. Portland Maps partners with the city for some of its maps; others are privately funded. But at the end of the day, they provide some of the most detailed and extremely specific information you can find about the Portland metro area, map-wise. And this is one of those cases.

Their alternative fuel map will show you exactly where electric car charging stations exist throughout the Portland area. It also lists places to get such alternative fuels as biodiesel and ethanol. And don’t worry if you’re thinking about zipping that little electric car out for a hike. This map goes as far as Mt Hood. Or, if you’re thinking the Gorge – all the way out to The Dalles.

Remember one of our pillars for livability – outdoor space? Portland has it in abundance. And it doesn’t just happen that way; it takes work and planning for a city to maintain beautiful outdoor spaces, where people can take a breath of fresh air. And while large parks like Forest Park or Mt. Tabor provide much-needed, respites, they also don’t tell the whole story.

Portland Park and Recreation also provides a fantastic map of tree inventory in the city. Click on any neighborhood to find out how many “street trees” you’ll find. That’ll give you a good idea of what a neighborhood looks like (from a tree’s perspective at least). The dark green areas are local parks, and clicking on them will tell you how many trees are being maintained there.

Also of note here is the Green Street Stewards Program. This program trains local volunteers in how best to maintain the health and beauty of their neighborhoods. Their map will show you everywhere stewards have signed up. This is a pretty cool way to see where folks are really invested in their neighborhood’s beauty!

No two ways about it: if you want a hike without a long drive, Portland is the place to be. From Forest Park’s 80 miles of trails to the hills of Southwest, to Powell Butte over on the other side of the river, there’s plenty to be had.

Unfortunately, there isn’t one great interactive trail map the way PBOT has produced a bike map. But there are some great resources we’ve rounded up here. First, PBOT does offer what it calls “bike-walk maps,” downloadable in PDF form in multiple languages. These maps are divided by the main sections of Portland: Northeast, Southeast, Northwest, Southwest, and North Portland.

While these are pretty convention, other resources exist out there for the avid urban hiker. Portland Parks & Recreation is a great way to look up any park you find yourself interested in. As for an interactive map, we recommend checking out SWTrails PDX. This organization prides itself on maintaining and promoting Southwest Portland’s beautiful and extensive network of urban forest trails. The map will give you information on trail locations as well as the surface material, which is great for accessibility.

Portland Neighborhood Guide makes that ineffable something easy to understand, giving you guidance from restaurants to real estate. Its neighborhood map is one of the best ways to acquaint yourself with Portland as a whole.

If any of the above maps have piqued your curiosity about buying a home in Portland, there’s one more smart search tool we’d like to share. Check out Portland Homes for Sale, which will let you search for the right home in the best neighborhood for you.

When you’re ready, our top 1% buyer’s team is here to assist you!