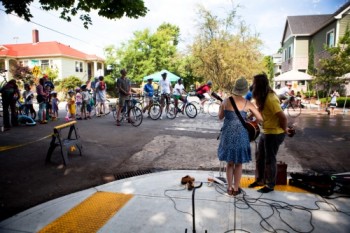 Lots of Portland neighborhoods made the news in 2015 — either for their growing popularity or because they’re changing with the tides of urban life. While the newspapers might lean toward hyperbole, the overall trend is that homes are increasing in value and that the city is working hard to include outlying areas and underdeveloped core areas in its growth. Here are five talked-about neighborhoods that stood out for me as a real estate agent, and they’re worth keeping an eye on as we move into the Portland real estate market of 2016 and beyond.

1. Hawthorne. According to the Seattle-based real estate website Redfin, the Southeast Portland neighborhood of Hawthorne was among the most competitive neighborhoods in the entire nation for homebuyers in 2015. How competitive? Over 40% of sales in Hawthorne were all-cash transactions, with many fast-paced bidding wars. If you want to buy a home in this neighborhood in 2016, be sure your Portland real estate agent is up for a challenge!

2. Milwaukie. This up-and-coming city lying just to the Southeast of Portland was featured not only in this real estate blog in 2015, but in Portland and national news also for its rebirth as Portland’s bedroom community. Milwaukie residents enjoy the best of both worlds — quiet suburban life on the Willamette river, and a quick 30-minute commute to downtown Portland via a new light rail line. If you find a good buy in Milwaukie, jump on it!

3. Northeast Portland. Although it comprises many smaller neighborhoods, I wanted to highlight Northeast as a whole because it really has made a comeback in the last few years. It’s gained a reputation as “where to live” if you want the convenience of living close to downtown but don’t want to pay high property taxes. Last year, two NE neighborhoods, Concordia and Eliot, made Redfin’s list of “hottest” neighborhoods for the entire country! And the City of Portland just announced a $96 million plan to build new affordable housing in the Interstate Corridor urban renewal area of inner North and Northeast Portland over the next decade.

4. South Waterfront. Located on the Willamette River just south of downtown, the Waterfront district was the darling of condo developers right before the 2008 economic downturn. The Oregonian has a great article on the saga there, but the upshot for Portland real estate buyers is that new units will slowly be coming on the market again here starting in 2016. Those with units to sell are sitting pretty — with expansion underway at Oregon Health & Science University and the completion of the Tilikum Crossing bridge, the Waterfront is soon to be an even bigger destination and thankfully, much easier to access via public transit, bike or foot.

5. Lents. Never heard of it? It’s on the outskirts of Southeast Portland, but right in the middle of the hearts of trendsetters at the magazine Thrillest, who just named it one of the top “neighborhoods in America about to blow up”. Given the explosive condition of the Portland real estate market in general, it’s easy to say that, but the article backs up the claim by citing real estate agents who have seen homes in Lents double in value in 2015.

Is your new years’ resolution to buy or sell a home in Portland? As your real estate agent, I promise never to use phrases like “about to blow up”, but I will give you the best data at my fingertips and great customer service every step of the way. Contact me today to get started!

Top Five Tips for Borrowers in 2016