What are the Quietest (and Loudest) Neighborhoods in Portland? 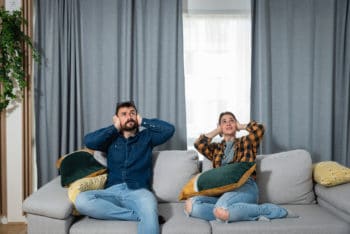 Did you notice how quiet life got at the beginning of pandemic? As we all sequestered indoors, traffic decreased—even disappeared in some areas, the din of human voices didn’t mix and mingle with the air waves, and even mass transit met a lull for a short time.

But life goes on, and humans find ways to maintain and continue. With the world slowly opening up and/or figuring out how to function in this new normal, noise levels are increasing, as well.

Whether you’ve stayed put since the pandemic began, whether you made a move, or whether you’re thinking about making a move now, knowing where to find peace and quiet is important for quality of life.

We took a recent look at noise complaints and found some of the quietest (and loudest) neighborhoods in the Portland metro area.

Neighborhood Noise Pollution, A Threat to Your Health

In urban environments, noise is everywhere, from abrupt, acute situations, like leaf blowers, jets, construction, and loud outdoor music events to more chronic, almost unnoticeable, occurrences that become part of the fabric of city life, like constantly running HVAC systems and traffic, including mass transit. These constant sounds can turn up the decibels to a constant 80 dB in some residential areas, the equivalent of standing next to a perpetually running vacuum. Because noise isn’t tangible, it’s easy to be unaware of its effect on us.

But noise pollution is real and with it comes challenges to our day-to-day quality of life, including certain health concerns. The Environmental Protection Agency (EPA) has deemed noise pollution a threat to our overall health, noting its contribution to stress related illnesses, hearing loss, speech interference, high blood pressure, and lost productivity, as well as cardiovascular disorders, ulcers, sleep disturbances, and even low birth weight in babies.

Invasive and constant noise can present learning challenges for kids, too, and especially for those with ADD and ADHD. Sound pollution can also have a notable impact on mental health. In fact, a European study noted an increase in anxiety medications in those living in areas with a 10-decibel increase in airport noise. Another follow-up study found marked depressive symptoms in people who lived in areas with high residential traffic noise.

Not only does noise pollution have a definable impact on our physical and mental health, one study also found that home values go up between 8-10% when a home is away from a busy road.

Life east of the river is noisier than life west of the river, and the further northwest you go, the more quiet you’ll find (hilly and forested areas cut down on noise significantly).

Some of the noisiest neighborhoods in Portland are in the northeast quadrant of the city. Add all the disruption the airport generates to the usual noises most city dwellers consider “business as usual,” and you have a whole other layer of noise pollution to consider.

If this is a concern for you, moving to some of Portland’s northeast neighborhoods is not your best option. Take, for example, Portland’s Sunderland neighborhood. Not only does it sit directly next to Portland International Airport’s boundary, it’s also located within a mostly industrial neighborhood. Other neighborhoods in this area are Cully, Sumner, Parkrose, and to a lesser degree, Argay Terrace. If you’re looking for quiet, these are not the neighborhoods for you.

Of course, for many, where they live is not determined by choice. A 2017 study shows the unfortunate reality that low-income neighborhoods, and especially minority neighborhoods, have some of the highest noise pollution because they are typically situated near industrial parks, roadways, and airports.

Other Portland neighborhoods subject to potential long-term construction noise are those running along I-5, which is slated for expansion. They are: Lloyd District, Eliot, Boise, Humboldt, Piedemont, and East Columbia on the east side of I-5. Neighborhoods on the west side of I-5 are: Overlook, Arbor Lodge, and Kenton.

What Makes a Neighborhood Quiet?

There are a few things you can look for when shopping for a home and want to consider noise levels.

Our Top Picks for the Quietest Portland Neighborhoods

Virtually all of Northwest Portland, outside the boundaries of the NW 23rd-Nob Hill District, was void of noise complaints, except for a single complaint of a roof fan in Northwest Heights. This incident aside, we consider the neighborhood to be one of our top picks.

Check out the links below and see what these neighborhoods have to offer.

While there were more noise complaints in some of Portland’s southwest neighborhoods, they were far fewer than those on the east side of the city. Taking this into account, along with the fact that I-5 and Highway 26 run through several of these neighborhoods, below are our picks for Southwest Portland.

One thing to keep in mind about this part of the city is that it’s densely wooded, so there are likely pockets in some southwest neighborhoods not listed here that also offer peace and quiet, even with nearby freeway noise.

Looking for a New Home in a Quiet Location?

Give our top 1% buyers team a call today. We have the full list of homes for sale in the Portland metro area in quiet neighborhoods. We’d love to help you find your next perfect home

How to Make an Winning Offer on a House