What is a Dutch Colonial Style Home in Portland? 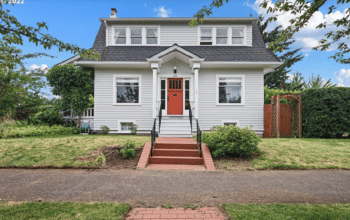 Portland’s residential architectural styles run the gamut and represent the historic changes and building trends the city has seen since its establishment in the 1800s. Some styles are concentrated in certain area, while others are sprinkled across the city. One thing is for sure: Portland’s housing and real estate options are as varied in style and personality as its residents.

Love a well-maintained Victorian? Always dreamed of living in a Mid-Century Modern? Want the coziness of a Bungalow? If you have a penchant for a particular architectural style, there’s a strong possibility you’ll be able to find it. See what we mean: take a look at the full map of all architectural styles for sale in Portland.

We recently looked at Portland’s real estate offerings and paid special attention to the Dutch Colonial style. We, not surprisingly, found that Portland has plenty of them. To find these homes on the Portland Homes for Sale website, we simply entered “Colonial” in the search bar, then zoom in on various sections of the map. Entering “Dutch Colonial” will narrow results even further.

What are the Features of the Dutch Colonial Home in Portland?

One of the main features of the Dutch Colonial style home is the gambrel roof, which creates its barn-like aesthetic. These homes have a grand appearance and soften the harsh roof edges many others had up until they came long. Not only did this change the aesthetic, it also meant a lot more room up top, usually creating an entire extra floor that had previously been lost to steep-pitched roofs. As you’ll see in the examples below, sometimes the roof slope faces the street. Other times, it faces to the side, with the roof’s apex facing outward.

In addition to the expansive gambrel roof, the Dutch Colonial home also features long eave overhangs, sash windows, wooden shutters, a dutch door at the entrance, and a fireplace and chimney (primarily for functionality). Most early Dutch Colonials were made of natural materials, including stone, stucco, and brick; however, the ones you’ll see around Portland are primarily made of wood.

Step inside a Dutch Colonial and experience elegance. Cost is not spared when creating these grand homes, and their entrances and staircases make this evident.

Some Dutch Colonials share similarities with the Craftsman style, like exposed beams, built-ins, and wood detailing (see the Becker House below).

What’s the Difference Between Colonial and Dutch Colonial Style Homes?

The Dutch Colonial falls under the larger classification of Colonial. All homes in this general style have a grand appearance and few spare expense on interior features and details. Some of these architectural styles—Saltbox, Georgian, Mid-Atlantic, Spanish, French, and German—can be found along the eastern seaboard and in other parts of the U.S., like Louisiana.

Where Did the Dutch Colonial Style Home Get its Name?

Very simply, the Dutch Colonial style of architecture originated from early American colonizers who immigrated from the Netherlands and built homes that reflected the Dutch style. These homes were initially built in the U.S. en masse from the 1600s to the 1800s.

When Did the Dutch Colonial Style Home Come to Portland?

The first Dutch Colonial style homes in the U.S. were built in the 17th and 18th centuries in the northeastern part of the country by Dutch colonists. These homes incorporated Dutch elements with an Americanized flair. Late in the 19th century, this style of home became popularized in a revival movement that proliferated across the country, born of a remembrance of simpler times when the Industrial Revolution was catching on. The term “Dutch Colonial” didn’t surface until the 1920s, however.

One of the first Dutch Colonial homes in Portland was the historic Christine Becker House at 1331 NW 25th Ave. in the Northwest District, designed by architect Emil Schacht and built in 1909. Shown in the image below, we can see the classic features of the Dutch Colonial, like the gambrel roof and sash windows.

The side view of the Becker House below shows the exposed chimney and stone application along the foundation.

Interior shots of this home, which is on the National Registry of Historic Places, show the Dutch Colonial grand staircase and the Craftsman touches mentioned above.

Where Can You Find Dutch Colonial Style Homes in Portland?

The Dutch Colonial style doesn’t saturate certain neighborhoods the way others, like the Craftsman or Ranch, do. But if you take a drive through neighborhoods like Laurelhurst, the Northwest District, and Irvington, you’ll see a few of these well-maintained beauties.

Looking to Buy or Sell a Dutch Colonial Home in Portland?

If you’ve fallen in love with this classic architectural style and can imagine yourself living in one, get in touch with our top 1% buyer’s agents at 503-773-0000. Or maybe you own one of these gems and are in a position to sell because you’re leaving the area or downsizing. Our top 1% seller’s agents are ready to help. Either way, we’ll put our almost 20 years of real estate experience in the Portland metro area to work for you. We look forward to talking with you and learning more about what you need!