What is a Victorian Style Home in Portland? 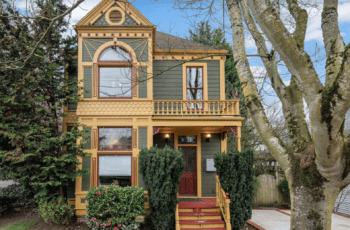 Portland is full of old, historic homes, many of which were Victorians, some of the first to help establish the area as a city. There are also plenty of newer Victorians, designed and built during revival periods for those who love the romantic whimsy found in much of this style of architecture.

Most of the features found in Victorians are attributed to the Victorian era, specifically (1837-1901) when Queen Victoria was in power. Her love of beautiful excess is evident in the features of this architectural style. Maybe one of the more pervasive styles in history, its reach extended all across the UK, New Zealand, Australia, and North America.

What are the Features of a Victorian Style Home?

Distinctive in design and atmosphere, Victorian style homes represent a time when overabundance was highly valued. The advent of new manufacturing and railways made it possible to access a wider variety of building materials than before, which signaled a turn away from building with local materials only, like the limestone, sandstone, granite, and bricks made of clay that had been used before.

Take a leisurely drive around some of Portland’s oldest neighborhoods, and you’ll see plenty of Victorians. There’s no mistaking these grand homes that, in many instances, resemble ornate, oversized doll houses.

One of the first indications that you’re looking at a Victorian is the roof: steep and with gables. You’ll also notice castle-like features on many of these homes, like dormers, turrets, and even towers. Decorative, sometimes elaborate, woodwork serves as detailed exterior decor. You might also see rounded shapes and accents in the form of windows (which also come in a variety of other shapes, as well)—some with stained glass—and bright, unique exterior paint colors.

Portland is a city committed to historical preservation, so chances are, you can find a lovely, well-maintained or updated turn-of-the-century home on the market, allowing you to enjoy both the charm and class of the old with the modern comforts of the new.

You’ll also be able to find newer homes in Portland designed with Victorian features, like the one below, built in 2003.

See all the Victorian homes for sale in Portland.

The exterior of the Victorian style home is an introduction to the charm and appeal you’ll find when you step across the threshold and wander around inside.

Typically two or three stories high, these homes have interesting floor plans, with little nooks in tucked-away corners for quiet interludes and alone time. High ceilings, said to have represented the wealth of the owner, give them a spacious feel, and the intricate wood trim and ornate staircases add a layer of old-world, high-brow sophistication.

Take a look below at the interior of the home shown in the featured image above, built in 1894, also currently for sale.

What are the Types of Victorian Style Homes?

A wide variety of styles fall under the broader Victorian umbrella, not all of which you’ll find in Portland. Those built in the city’s early days between 1840-1910 are described below. Others typically not found to any great degree in Portland are the Gothic (inspired by Medieval churches) and the Stick-Eastlake (simple and made primarily of wood), although a man named Herman Trenkmann built a small grouping of the latter on NW 17th and Hoyt in Portland where they remain today.

One characteristic of Italianate homes is their low pitched roofs and moderate to wide overhangs, decorative architectural features, and arched top windows with strong vertical orientations.

An excellent example of the Italiante style is the second Morris Marks House, located in the Goose Hollow neighborhood. (The first Marks House was on SW 12th and was moved to SW Grant and Broadway for renovation in 2017.)

Second Empire Victorian refers to a Victorian architectural style popularized in France during Emperor Napoleon III’s reign from 1852 to 1870. This French-inspired take on the Victorian style might remind you of Paris with its mansard roofs (four sloping sides), eaves with decorative brackets, molded cornices, and design elements that simulate carved stone.

The Jacob Kamm House, completed in 1871, was moved from its original SW 14th and Main location to a temporary location in July 1950 to make room for the new Lincoln High School campus. The move was initiated when preservationist Eric Ladd bought the home for $1,000 at an auction. The home found its final resting place at 1425 SW 20th Avenue Portland with two other homes Ladd intended to preserve. He called the group of homes “the colony.”

Queen Anne Revivals were inspired by the Queen Anne era from the early 1700s, a period that inspired the whimsical aspects of the Victorian style. This is where the turrets, towers, spindle work, bright colors, and asymmetrical facades come in.

A perfect example of this type of architecture in Portland is the Johan Poulsen House at 3040 SE McLoughlin Blvd. Now painted bright blue, you can catch a view of it on the hillside as you cross the Ross Island Bridge.

The Victorian Farm House is characterized by its simplicity, with the two main defining features being its simple, steeply pitched roofs and long, vertical windows.

A local example of this type of Victorian architecture is the Augustus Fanno House in Beaverton.

How Did the Victorian Style Home Get its Name?

The Victorian style home, quite simply, got its name because many of its features and aesthetic design choices come from Queen Victoria’s reign in Britian.

When Did Victorian Style Homes Come to Portland?

The first Victorian style homes in Portland were built in the mid 1800s. Many of these homes populated what is now the downtown area and were demolished to make way for businesses. Others were built—and still remain—in Portland’s NW quadrant, specifically, in what is now known as the Alphabet District.

Victorian style homes started to appear on Portland’s east side after the Morrison Bridge was constructed in 1887. Many still stand throughout the city.

Where Can You Find Victorian Style Homes in Portland?

In addition to the Alphabet District, you’ll find Victorians in pockets of Portland where you might not expect, like the Belmont/Hawthorne area. Construction in areas further from downtown were made possible by the steam railway that went as far as the base of Mt. Tabor.

Sellwood is a neighborhood with many original Victorians, initially set on being its own community, separate from Portland, before being annexed by the city in 1893. Giddeon Tibbets built his family home and mill in what is now known as the Brooklyn neighborhood in 1851. He subsequently subdivided, and many of the Victorians that came after remain. You’ll find more Victorian style homes in Portland’s Irvington neighborhood.

Looking to Buy or Sell Victorian Style Home in Portland?

If you’ve been looking for one of these treasures, our top 1% buyer’s team can help you find what you want. Likewise, if you have one to sell, our top 1% seller’s team can list it and make sure you get the best price possible. We have almost 20 years invested in helping people find their next perfect home across the Portland metro area, and we’d love to help you. Call our direct lines or chat with the bot on our site.

Asbestos in Your Home. What to Look for, How to Test.