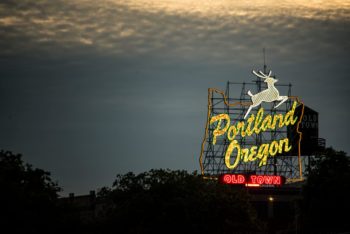 Thinking of buying a home in Portland but not sure where to start? Right now is a very strange time to be buying a home. It’s the middle of a pandemic, which makes it much more difficult to get a feel for neighborhoods. When even the concept of indoor dining is at times hypothetical, how do you get a gauge of a neighborhood?

But the good news is that means there’s still so much out there to be explored! So to help you in your search for a new home, we’ve gathered up our top ten favorite neighborhoods in Portland right now. If you’re wondering how we decide – well, the thing about neighborhoods is they’re organic. There’s something ineffable about every great neighborhood in every great city, which is why people love them so much. What we’ve taken into consideration for this list is a combination of affordability, high ranking schools, and amenities… and then on top of that, the little ineffable something else that makes a neighborhood special.

The Five Sections of Portland

Before we jump into the details, let’s zoom out to establish a broader understanding of Portland geography. If you’re looking to buy a home in Portland, it’s useful to familiarize yourself with the five sections: Southwest, Northwest, North Portland, Southeast, and Northeast. (Okay there are now six sections including a newly designated South Portland, but it is quite small in comparison to the others.)

Our Top Ten Portland Neighborhoods for 2021

Let’s start in Southeast. Sellwood is a pretty small pocket tucked away south of the hustle and bustle of inner Southeast. Bordered on one side by the Willamette River and on the other by historic train tracks, it operates to an extent as its own little hamlet. Just to the north lies Westmoreland, and accordingly, across the tracks Eastmoreland. But to be clear, there’s no wrong side of the tracks here. On the west side, closest to the river, you can have the best of both worlds: feel completely immersed in nature at Oaks Bottom Park or dine out, make a stop an excellent public library, or browse the antiques markets.

Once you cross the tracks and head north a bit, you’ll find yourself in Richmond, one of the true gems of Southeast Portland. Stretching from Powell Boulevard to Hawthorne Street, this area has it all, including a stretch of Division Street that manages to be exciting and homey at once. Beautiful and eclectic homes sit just steps away from some of the most interesting restaurants in the city.

Being so close to the action isn’t for everyone. For anyone who’s searching for a little more suburban room to breathe without having to sacrifice the city’s amenities, Pleasant Valley is a great go to. It marks the southeast corner of Portland proper and encompasses Powell Butte, an expansive park. This is a quiet corner of Portland with ample opportunities to get outdoors. The type of real estate you’ll find here is all over the map – you could be looking at multi-story mini-mansions or ranch-style starter homes. So, the possibilities abound!

Tucked just past Mt. Tabor you’ll find yourself in Montavilla, which in 2017 was named one of the top ten neighborhoods to visit in the country. For many of the reasons we’re now recommending it to you! It’s artsy and cultured, but unpretentious. Here you’ll find primarily modestly priced homes that are an easy walk to a charming commercial strip that includes some city favorites. Check out La Bouffe for international groceries or Hungry Heart for one of the best cappuccinos in town.

And now we move on to Northeast. Putting Hollywood on this list is a little bit misleading, as there are other neighborhoods surrounding it (Grant Park, Laurelhurst) that offer plenty of residential listings. But that’s because the Hollywood district is tiny. That being said, it’s a little epicenter of urban action. You won’t find wild, crazy nightlife here necessarily – but you will have excellent dining options, a historic eponymous theater, and one of the finest farmer’s markets in Portland.

Looking into Northeast Portland but want to be a little closer to the action? Irvington is a solid bet for anyone searching for beautiful, historic homes that don’t isolate you in the suburbs. These days, Irvington has generally seen homes at a higher price point, so it’s not for everyone, but you see your money’s worth in beauty, highly-rated schools, and a dedicated community.

It may be just a hop, skip and a jump across from Forest Park, but St. John’s almost feels like a separate city. Often described as a town within a city, it’s a fantastic option for anyone searching for the quaint life. Typically home prices in North Portland are on the lower end of the spectrum, so it’s also a real opportunity to make the most of your money. Plus, who doesn’t want to start their hike in Forest Park with a scenic drive over the fabulous St. John’s Bridge?

Speaking of Forest Park, now it’s time to cross the river into Northwest. Northwest Heights is tucked into the southern crook of the park, so for anyone craving the city and the forest at once – this is the place to be. This is also one of the more upscale parts of the city and is famed for its residents keeping things neat and tidy. If upscale and community-oriented is your goal, Northwest Heights offers beautiful homes and a tight-knit community to join.

Finally, our last two picks for the best Portland neighborhoods lead us to Southwest Portland, where you’ll find everything from the city’s busiest streets to quiet neighborhoods. Multnomah stands out as an area with a ton of potential. Multnomah Village feels like it could be a small town in the hills, some place you stop on a road trip and are delighted to find an excellent book store or wine shop. Yet it’s just over the hill from downtown. If you want a more rural feel but don’t want to be too far from the city, this is the spot.

Lastly, let’s give a shout out to Goose Hollow, which lies the closest to downton Portland as any neighborhood on this list. Just at the border between Southwest and Northwest, Goose Hollow is the spot for a true city slicker. Seconds for the 405 and Highway 26, your access is unparalleled. Feel like staying closer to home? See a soccer game at Providence Park – Thorns or Timbers, take your pick! If you didn’t get tickets, not to worry, as many bars in the area will keep the energy level high. If you’re in a quieter mood, the neighborhood abuts the Portland Rose Garden, so take a stroll and breathe it in.

How to Find the Right Neighborhood in Portland for You

To an extent, finding the right neighborhood for you is like trying on clothes. There’s no real way to know if a neighborhood feels right until you go check it out in person. We listed here some of our favorite little nooks of our big city, but words only go so far.

Feeling tempted to see if one of these neighborhoods will be the site of your new home? We are your top Portland real estate agents, with a top 1% buyers agent ready to assist you.