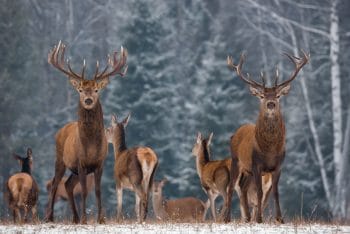 Portland: Yes, it’s a city in Oregon, but just because it’s urban doesn’t mean it can’t be wild. If you’re a new homeowner — or you’re thinking of buying a home in Portland — you may be surprised to learn that there are over 300 species living within city limits! Some may call your back yard, front garden or neighborhood park home. Read on to get to know the neighbors.

Birds are a delight to everyone, whether you’re a dedicated bird-watcher or just enjoy seeing them flutter outside your window. Songbirds are abundant across Portland, but if they’re not as common in your neighborhood, putting up a bird feeder or bird house may not instantly draw them in. (Unfortunately, birds don’t have real estate agents to show them where the good homes are!) The National Wildlife Federation recommends using a “songbird mix” in your feeder to attract a wide variety of feeding birds. Areas of leaf litter as well as trees and shrubs native to Oregon are even better sources of bird food: the worms, insects, berries and nuts these birds evolved to eat — and they’re free! Check out this Metro article to learn more about creating friendly habitats in your backyard.

One bird to look out for is the European Starling. These birds are a major pest because they tend to form large flocks and nest in eaves and unused buildings. If there is a Starling infestation on your Portland property, call a pest control specialist.

Bird feeders naturally attract squirrels.  According to the Oregon Department of Fish and Wildlife, there are four species of squirrel native to Portland: western gray, Douglas, American red and northern flying squirrels. The most commonly sighted squirrels in Multnomah and Washington counties are non-native: The Eastern gray and Eastern fox squirrel. Biologists recommend not feeding any squirrels because there’s no way to avoid feeding these invasive species. If you feed birds, buy a squirrel-proof feeder and avoid spilling birdseed on the ground. Also, acorns don’t help pay the mortgage, so avoid giving squirrels a free place to live in your home! Replace loose or rotting siding or shingles right away, and seal the areas around dryer vents and other openings.

According to The Atlantic, Portland is better than most cities at managing its rodent population. Portland has fewer rats than other metros, and those that are here are not as aggressive as other urban rats. However, the article points out, this situation is due to the historic vigilance of residents and businesses alike, and homeowners should not be lax in their pest-prevention practices. Remember that, like squirrels, mice and rats can nest in attics and empty wall spaces, so be sure to avoid giving them access. Keep garbage and compost enclosed in bins, and feed pets indoors. Rats can also make their homes in disused sheds, bins and play structures, so be sure to check these spaces regularly and take appropriate steps to discourage rodent activity.

Also in the “pest” category, raccoons pose the added threat of attacking housepets and frightening humans! Although they can be cute, these animals are fierce and havoc-wreaking. If there are raccoons in your Portland neighborhood, you may need to lock your garbage and exclude all protein, including eggshells, from your compost bin. A licensed pest control company can trap raccoons that have taken up residence on your property — they love crawlspaces! If you have a resident raccoon, definitely have it removed before you list your home on the Portland real estate market. For more on Portland raccoons, the Portland Mercury has a very entertaining story.

Opossums are not as common as raccoons but they share some characteristics: They feed on garbage or pet food and may carry disease and fleas. Unlike raccoons, they are typically not dangerous and are wary of dogs and humans. In fact, you may have opossums traveling through your property and never know it because these animals are strictly nocturnal. If they do pose a problem, call a licensed animal control specialist.

Many central Portland residents may be surprised to hear that the stag on the classic Portland sign downtown isn’t the only deer in the city! Small herds of white tail and black tail deer wander through gardens and yards on the West side, in East Portland, and in many of its suburbs. While most people enjoy seeing the graceful creatures make an occasional trip through the neighborhood, gardeners find deer to be a bit of a pest. Not feeding deer is the best way to encourage them to move on. If you see one while driving, use caution — there are usually more about to cross the road behind it.

We don’t think of them as “backyard wildlife”, but fish certainly exist in Portland’s many streams and waterways. And, human activity impacts fish because water moves downhill — carrying with it whatever washes off of yards, roads and driveways. Portland biologists recommend avoiding chemical fertilizers and harmful weed-killers, and only washing your car at designated car-wash stations (use biodegradable soap). Be fish friendly!

Toads, frogs and other amphibians may already be living in your yard, and they’re a healthy part of a garden ecosystem. They feed on insects, and together with birds, they form a natural pest-control system! Frogs need a continuous source of water to survive, such as a small pond or a pool where rainwater collects.

Bees, Butterflies and Other Insects

What would summer be without the buzz of bees and the chirping of crickets in your neighborhood park? Portland has an ideal climate for a variety of insects, including some rare and beautiful butterflies. Attracting them is easy with native shrubs and flowers, which also appeal to bees. Most urban Portland bees are honeybees, which are rarely aggressive. In fact, your neighbor might have a hive in his or her backyard!

Don’t confuse bees with harmful wasps, yellow jackets and hornets. These pests tend to build nests in eaves and gutters and can be a painful nuisance. If you do find a nest, be sure to take care of it as soon as possible (but only at night when the insects are dormant).

Another common insect that poses a threat to Portland homeowners are carpenter ants, which can eat right through wood as the name implies. Termites and cockroaches, on the other hand, are not usually found here in the Pacific Northwest. If you suspect carpenter ants, call an exterminator right away as they can inflict significant home damage. Ask your real estate agent if you need a referral.

What to do with injured wildlife in Portland

Found a baby squirrel or bird with a broken wing? The Portland Audubon Society has a Wildlife Care Center that accepts native animals in need of help seven days a week! Always use caution in approaching wild animals, and use gloves or wash hands immediately afterwards.

How the 2018 Tax Reform Bill will Affect Real Estate