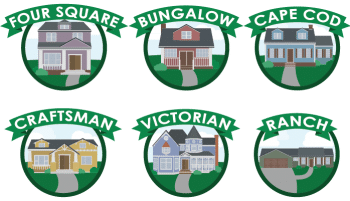 Did you know that there are around 150,000 homes in the City of Portland? Strolling through the neighborhoods, you’re likely to find many homes that look appealing — cute bungalows, sprawling Victorians, modernistic marvels. Have you always wanted to know what era a particular home is from, just by looking at it from the curb? Here’s a quick guide to what you’ll find when you’re out shopping for a Portland home.

Architectural historian Thomas Hubka, in an excellent article for the Oregonian, writes that the home style most people envision when they hear the word “Victorian” is actually hard to come by these days in Portland. There are two reasons for that. The first is that the supply of Victorian homes in was never great in the first place.
“In the late 19th century, most Portlanders did not reside in the grand Victorian mansions usually photographed,” he says, “but instead lived in either multi-unit tenement and boarding houses or small, two-and-three room wooden houses and workers cottages.”
These small houses and cottages can still be found lining the streets of Portland today. Hubka describes them as “small vernacular houses with doors in either the gable-end or the long-side.” The “gable” is the part of the wall that encloses a pitched roof — the style of roof you make with your hands when you put your fingertips together, wrists apart.
If you do find an true Queen-Anne style Victorian home in Portland today you’re lucky. The second reason we don’t see many is that most were destroyed — not to build more modern homes or apartment buildings, but to create the streets, highways and infrastructure to accommodate a new wave of residents.
Many more workers’ cottages survived, and so you may be living in a Portland Victorian (era) home and not even know it!

Bungalows for the People

The original wave of Portland bungalows were built before the 1920s, according to Hubka. They were built as one-story homes with an asymmetrical shape, long, sloping rooflines and all-wood construction. Like Victorian-era homes, most bungalows built in this time had a front porch, a feature that continues to define Portland’s welcoming neighborhoods today.
Slightly bigger than the workers’ cottages of the Victorian era, and with a more open floor plan, bungalows remain wildly popular. In fact, as a real estate agent, I find that they are the Portland home style most widely recognized and sought after by buyers!
The Arts-and-Crafts, or Craftsman style, is closely related to the Bungalow. In a rebellion against Victorian wealth and over-decoration, these artists and architects wanted to create things that were simple, functional, and emphasized the beauty of the hand-made, or “craft”.
The difference between a Craftsman home and a simple Portland bungalow is that Craftsman homes may contain multiple levels and larger floorplan, with an emphasis on built-in cupboards and cabinets that show off the craftsmanship of the builder.

Just like fashion styles come and go and and repeat themselves, Portland homes often mimic an architectural style from another time and place.
Many homes built between 1920 and 1950 were of this “period revival” style, according to Hubka. They tended to imitate either American Colonial homes or European styles like the English cottage.
Drive around some of Portland’s newer subdivisions, and you’re likely to see modern takes on these old classics.

The simple lines and subtle elegance of the Midcentury Modern aesthetic is all the rage in Portland right now, and that extends to homes as well. A recent article in the Oregonian discusses the appeal of these highly livable Portland homes.
If you’ve seen the show “Mad Men”, you know the architectural style I’m referring to. The open floor plan emphasizes family togetherness, and large windows and sliding doors allow indoor-outdoor living and entertaining. The California home builder Joseph Eichler is most commonly associated with Midcentury Modern Homes, but Oregon had its own Eichler – Robert Rummer.
In the 1960s and 70s, Rummer adapted this style to build about 750 homes throughout the Portland Metro area. He was known for his attention to the quality of his materials and his affection for the families that would occupy his homes for generations. Today, according to the Oregonian, the median list price for a Rummer home is $542,450 and the median days on the market is six!
The non-profit Restore Oregon holds a tour of several of these homes every summer — definitely worth a ticket if you’re into unique Portland homes and high quality construction. The tour centers on Oak Hills, Oregon’s first designated Historic Neighborhood from the midcentury modern period. Oak Hills is located just north of Beaverton, in Washington County.

What most people think of as the suburban “ranch” home around Portland is actually a hybrid style of home, according to Hubka.
During the post-WWII housing boom, ranch-style layouts included traditional features like peaked roofs and shutters.
“’Minimal-traditional’ is a way to describe these most common houses,” says Hubka, “which combined modern materials (like plywood) and modern aesthetics (like corner windows) with older traditions’ features.”
The hills of Southwest Portland gave builders in the 1960s a unique challenge. They took the split-level Ranch style popular in the country at the time and split it up a little bit more — to a two-story. By “digging in” to the hill, they could make maximum use of a sloped lot.

Not sure what architectural tradition your home represents? Ask your real estate agent — I’ve walked through thousands of homes around Portland in my time! Knowing those architectural buzzwords and including them in your listing not only gives your home an anchor in time and place, it also gives buyers something to look for when they tour your home.

Some history about your specific home could also be useful to potential home buyers. The Multnomah County Central Library has old Portland directories that can tell you names and occupations of those who once lived at your address. The Portland Architectural Heritage Center is also a great resource with historic home tours and classes available.

Portland Property Tax is Going Up in 2017