What is a Craftsman Style Home in Portland? 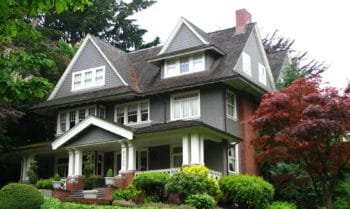 Thanks to Portland’s ability to satisfy the housing and cultural needs of its residents and to follow building and structural design trends, our city is full of a wide array of architectural styles in the residential real estate market.

From Portland’s early days of Victorians to its more recent contemporary, modern styles, the Rose City has a diverse selection of homes to not only satisfy all the essentials buyers look for in a home, but to also express their personality and aesthetic tastes.

We thought we’d focus on the Craftsman style and see what Portland has to offer. Whether you want an original, renovated Craftsman or a newer revival Craftsman, you’ll definitely want to take a look at the full map of Craftsman style homes for sale in Portland.

To find these homes on the Portland Homes for Sale website, we simply entered “Craftsman” in the search bar. From there, you can zoom in on any quadrant or neighborhood in the city for a closer look.

What are the Features of a Portland Craftsman Style Home?

The architectural features of a Craftsman style home arose from the Arts & Crafts (A&C) movement in the late 1800s to early 1900s as a response to the overly ornate, Victorians of the previous era, and were largely constructed of machine-generated products. Looking for a better way to build and live, designers drew on the simple, functional styles from A&C furnishings and decor.

The intention of the early Craftsman style home designers was to leave a small footprint by way of smaller (but high quality) living spaces and to build with natural (and often local) materials.

The appeal of these homes was in the skilled craftsmanship and their ability to provide comfortable living, created by design elements, material choices, and their energy efficiency.

And let’s not forget the “arts” part of this style’s influence. Quality materials—wood, stone, or brick—are showcased as part of the charm and appeal, right alongside the apparent display of skilled handicraft.

Many Pacific Northwest Craftsman homes possess a kind of opulence—even the most simple ones—due to the plentiful use of wood throughout, a plentiful product at the time. On the exterior, these usually show up as painted porch beams. In the end, a Craftsman home is seen and experienced as not just a house, but also a work of art.

Craftsman style interiors are known for their built-in spaces and open floor plans, both of which were included for aesthetic appeal, comfort, and functional livability. Prominent fireplaces are also often found and, in many of the originals, served as an essential element to the daily use of the home.

As with the exteriors on Craftsman homes, woodcrafting is also an interior feature. Over-sized beams and rafters were often installed to accentuate the style’s wood aesthetic, including box beams in dining room ceilings to evoke a Medieval atmosphere.

Where Did the Craftsman Style Home Get its Name?

The term “Craftsman,” as related to architecture, can be attributed to a man named Gustav Stickley, who published a magazine called The Craftsman from 1901-1916. The purpose of the magazine was to celebrate and champion the A&C movement, which started in the British Isles, then spread across Europe and made its way to the U.S., with a focus on interior and landscape design, decorative arts, and applied arts.

The magazine’s architectural offerings were heightened by the contributions of Harvey Ellis, who died months after Stickley hired him. His short tenure with the magazine led to the creation of The Craftsman Home Builders Club, which was ultimately responsible for providing Craftsman home building plans to the magazine’s subscribers.

Are Craftsmans and Bungalows the Same?

People often use the terms “Craftsman” and “Bungalow” interchangeably. For purists, they are not the same. They would tell you that a Craftsman can be a Bungalow, but a Bungalow can never be a Craftsman. And here’s why.

Originally, the only homes to be considered true Craftsman style were those built with the plans provided to subscribers of Stickley’s The Craftsman magazine. Bungalows evolved from the originals.

One way to make the distinction between the two is to think of a Bungalow as a smaller, simpler version of the Craftsman.

Where Can You Find Craftsman Style Homes in Portland?

The surge of Craftsman style construction happened in Portland between 1905-1930. While this charming home style can be found throughout Portland (recreated in new construction homes spanning multiple decades), there’s a heavy concentration of them in the inner east side, specifically, in Ladd’s Addition, one of Portland’s older and more established neighborhoods.

Other Portland neighborhoods graced with these lovely homes are Irvington, Piedmont, Sunnyside, Portland’s west hills, and many of the city’s northwest neighborhoods.

Looking to Buy or Sell a Craftsman Style Home in Portland?

Curious about Craftsman homes for sale in Portland? Our top 1% seller’s agents and top 1% buyer’s agents would love to put our almost 20 years of experience and our focus on customer service to work for you. Give us a call today or chat with our bot on this site. We’re happy to show you Portland Craftsman homes for sale, or any other style of home you’re looking for!