What is a Foursquare Style Home in Portland? 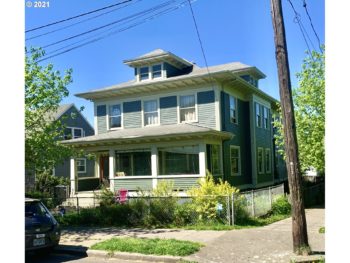 Chances are you’ve passed by Foursquare homes in Portland dozens of times. Maybe you paused to take one in, admire the dignified simplicity of the structure. Whether you realized it at the time or not, you were looking at one of America’s most iconic home styles. And Portland is home to many of the country’s finest examples.

Today we’ll take a dive into the history and characteristics of the Foursquare style home in Portland. What makes a Foursquare home a Foursquare home, how did this style come about, and why do we still love it? Let’s explore what makes these historic homes both modest and grand at once.

What Is a Foursquare Style Home?

The shortest answer to this question is that Foursquare homes were named for their cubic, boxy shape. But the history behind how this style rose in popularity has much more to say.

The Foursquare style first came on the scene in the 1890’s and remained one of the most commonly used styles for new construction into the 1930’s. Architectural historians generally ascribe its popularity to a reaction against the more ornate, Victorian styles that preceded it, particularly the Queen Anne style. The Queen Anne aesthetic was much more elaborate, usually employing an asymmetrical facade and embellished woodworking.

Note the gabled roof, bright colors, bay windows, and striking turret. In the late 1800’s, the decadence and opulence of the Victorian era came to a zenith. But by the turn of the century, a backlash ensued in nearly every art form, architecture included. The response favored the style of the Prairie School and the Craftsman style, both of which prefer cleaner lines and a more “natural” feel.

You can see the contrast in this image of a typical Portland Foursquare home. Sharp, horizontal lines and a fairly unadorned facade eschew what was then perceived as the excess of the Queen Anne style.

If this architecture style seems more approachable to the every person, you’re on to something. According to bobvila.com, we can credit the Foursquare’s popularity in part to Sears Roebuck, which sold prefabricated, mail-order Foursquare homes through their catalog. The streamlined design made them easy to reproduce and budget-friendly. So in a sense, the American Foursquare was designed to be accessible. The middle class could afford these homes without sacrificing beauty.

As with any architectural style, the Foursquare has some distinct features, sometimes borrowing elements of the Prairie School (informed by Frank Lloyd Wright’s Prairie style) and Craftsman styles. One of the driving concepts behind the Foursquare was that of stacking living spaces to make better use of narrow city lots.

When Did the Foursquare Style Home Come to Portland?

Portland experienced a building boom just after the 1905 Lewis and Clark Exhibition. The Foursquare was a predominant architectural style in Portland with most of them built before World War I. While construction of this classic style decreased after that, they continued to be built to a lesser degree through the 1920s and into the 1930s.

As we’ve covered, the Foursquare style certainly favors simplicity and symmetry over intricate opulence. But there’s more to it than that. The more you look, the more you’ll notice that Foursquare homes in Portland exhibit a common set of characteristics. The most recurrent features include:

Yes, we just gave you a list that seems pretty cut and dry. And yes, many future homeowners bought their Foursquares via catalog. But that doesn’t mean that all of them are exactly the same. As with any architectural style, differences crop up here and there.

Because the base aesthetic of the Foursquare is so clean, it creates a kind of blank slate that can allow for folks to elaborate upon it. Many Foursquares adopt Craftsman details such as exposed rafter tails (you can see these on the example above, peeking out from the underside roof). Others might borrow more aesthetically from the “Prairie School.” Frank Lloyd Wright famously made a big mark on this movement, which prized working with instead of against the landscape. Some details you might notice that overlap with Prairie style are geometric ornamentation and horizontal lap siding.

And of course, many owners alter their Foursquares over the years. Additions and updates commonly reflect an individual owner’s needs and taste.

In the above photo, you can see this Foursquare appears to have a bay window, a sun deck above the porch, and possibly a build out on the side. So while it checks a lot of the traditional boxes – a dormer, 2.5 stories, basic square shape – clearly it also deviates. We don’t know for sure if these variations are original or were added later, but safe to say that Foursquares in Portland still offer variety.

Where to Find Foursquare Style Homes in Portland

Foursquare homes pepper any older neighborhood in Portland. You’ll find them in any established neighborhood, especially closer in to the city. The Buckman and Brooklyn neighborhoods. But Foursquares exist on the west side of the river as well. Right now, in fact we know of two up for sale in historic Goose Hollow and Nob Hill. Check out these Foursquares on the market right now:

Interested in finding your own Foursquare to call home? Schedule a tour today and get searching. Our top 1% buyers’ agents are always available help you out. And in the meantime, take a walk and see if you can spot a Portland Foursquare home!

How Big Should Your Next Home Be?