What is a Mid-Century Split-Level in Portland? 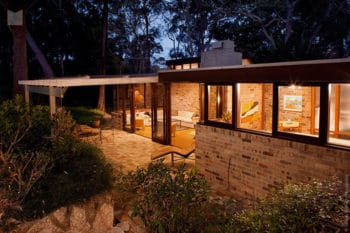 Residential architectural styles run the gamut in Portland, which traces the city’s historic development and speaks to its willingness to bend with the times.

Mid-Century Modern homes have distinct features that set them apart from other types of styles and represent a stark contrast from those that came before them. In response to the second World War, designers and homeowners alike were looking for living spaces that represented a sense of freedom and the dissolving of boundaries. Hence, open, flowing floor plans; use of large, expansive windows; and the integration of the structures with natural surroundings.

In this article, we’re looking at one derivative of this style, specifically, at the Mid-Century Modern, Split-Level home.

The Mid-Century Modern Split-Level home became popular in the 1950s due to its cost-effectiveness—you get more house for your money in a split-level—and efficient use of space. The short, staggered stairs found in these homes allow for three living areas with a sprawling feel, yet great separation of space.

Materials used in the construction of these homes was dependent on geographical location. In Portland, wood lap siding and brick were typical. In some cases, stone may have been used as an accent, along with other elements like porch columns and shutters.

The roofs on Mid-Century Modern homes are void of dormers due to their low-pitched slant, resulting in very little attic space. Modest renditions tend to have less roof overhang with more expensive split-levels having more, sometimes with exposed rafters. Because these homes were intended to be constructed with cost in mind, asphalt shingles were mostly used.

Before you step inside one of these homes, you’ll likely encounter a protected entryway, set back into the front facade of the home. Some may have a simple porch or stoop area, tucked away under the roof. Also, the entry may be clad with a different type material or a color that stands out to designate it as the entry to the home.

Probably the most prominent window feature on split-level, mid-century modern homes is the wide picture window with part of the window fixed and the other part moveable to allow for ventilation. To align with the low-to-the-ground, horizontal design of these homes, windows often reflect this same shape, sometimes also in the form of hoppers, casements, awnings, and double-hung.

As mentioned above, split-levels have staggered common areas. The purpose of this design was to allow for an open feel with lots of natural light, while partitioning off various family activities. Dens and garages were generally found on the ground level with kitchens and living rooms in the middle section of the home and bedrooms on the upper level. Sometimes you’ll see the primary bedroom in the middle area of the home, intended for privacy.

Where Can you Find Mid-Century Modern, Split-Level Homes in Portland?

Most of Portland’s Mid-Century Modern homes were constructed between the 1930s and 1950s. You’ll find may of then in Portland’s southwest neighborhoods, an area where much of the city’s post-war construction took place.

If you take a drive through Vermont Hills and Burlingame neighborhoods, you’ll see the massive windows these homes are known for, the purpose being to provide nature views to homeowners.

Other parts of the Portland metro area with Mid-Century Modern homes include Parkrose and Milwaukie.

How the Mid-Century Modern Home Got its Name

The person most often credited with coining the name for this type of architecture is journalist, Cara Greenberg. The reference is an acknowledgement of the time-period during which these homes came into popularity and the desire for something new and different post-war. Soldiers were returning home to the U.S., many of them starting families. The economy picked up as new homes were built with the intention of providing people with a feeling of upscale living at affordable costs.

Interested in Viewing a Mid-Century Split-Level Home in Portland?

Portland has an impressive selection of Mid-Century Split-Level homes, some of which are on the market right now. If you’ve always dreamed of living in one of these iconic residences, now’s the time to see what’s out there and available. Get in touch with our top 1% buyer’s team via our direct line at 503-773-0000 or chat with the bot on our site. We’d love to put our 18 years of experience in the Portland metro area to work for you and help you find your dream home!

Why You Should Always List your Home on Multiple MLS Systems.