What is a NW Contemporary Style Home in Portland? 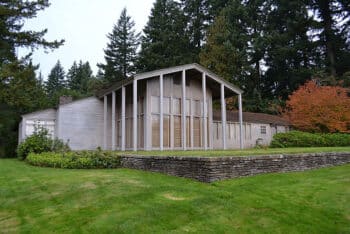 Portland’s residential real estate is just as varied as its wide array of residents. No matter your aesthetic tastes, you’re sure to find home styles in Portland that speak to your wants and needs. A popular style in Portland is the NW Contemporary, sometimes known as NW Modern.

This architectural style was derived from the International style, first developed in the 1920s and 1930s, then defined by Philip Johnson and Henry-Russell Hitchcock, curators of the Museum of Modern Art, in 1932. Inspired by the International design movement, minimalist design, and Japanese architecture, American architect, Frank Lloyd Wright, carved out a niche for himself by bringing his own flare and aesthetic to the design of this much-loved style that focuses on function over form.

Read on to learn more about this simple yet beautiful style that speaks to so many Portlanders.

The first exterior characteristic you might notice about NW Contemporary style architecture is the predominant use of unpainted wood. The purpose of this feature is to allow the structure to blend in with nature. But this intention doesn’t stop there.

Arising as a response to the industrial approach to home building when machine-made materials had become commonplace, those behind this simple yet elegant style had a desire to shift their focus to the humans who inhabited the homes they designed and the types of aesthetics they found beautiful.

The overall structure’s lines are thoughtfully placed to mimic or complement the lines of the surrounding lot’s vegetation, like the homes shown below, currently for sale in Portland. (Click the images for a larger view. Click the captions beneath them for more information about each.)

A unique blend of materials like stone, brick, wood, glass, and steel work together beautifully to add plenty of character—both outside and in.

Another prominent feature of the NW Contemporary that aligns with the style’s intention to blend with nature is the wonderful outdoor living spaces you’ll find, perfect for relaxing and communing with the great outdoors, even with the Pacific Northwest’s rainy winters.

The elements that define the NW Contemporary style exterior, continue on the inside, with unpainted wood, stone, and metal, across spacious, asymmetrical floor plans. Finishes on the inside are curated to continue the augmentation and integration of nature and living space. Exposed beams and high ceilings are common, and many of these homes are spread across one level.

Large windows made of floor-to-ceiling glass are also common, intended to give the impression of living in nature and providing plentiful natural light. Massive walls of glass were introduced by Frank Lloyd Wright to enhance the simplicity of the style, eliminating the need for artwork to decorate walls.

Unlike the decorative, sentimental aesthetic of many of the revivalist styles, like Queen Anne, Gothic, and Victorian, this architecture leans toward minimalist innovation and experimentation with, as mentioned, a focus on function.

How did the NW Contemporary Style Home get its Name?

The name of this style comes from having been made popular in the Pacific Northwest by Paul Thiry in Seattle and John Yeon in Oregon, used most often in residential buildings.

When did the NW Contemporary Style Home Come to Portland?

Louis Sullivan is credited with designing some of the first of these buildings for the 1893 Chicago World Fair. The style was solidified as one to replicate after Philip Johnson’s 1932 exhibit, with Frank Lloyd Wright further popularizing the style into the mainstream.

While modern architecture officially began in the early 1900s and spanned sixty+ years, this architectural trend was most popular in Portland between 1935—1960.

Where to Find NW Contemporary Style Homes in Portland

Most of the NW Contemporary homes you’ll find in Portland are on the west side of the river in the SW and NW quadrants of the city. However, one notable home is located in N Portland, designed by John Yeon.

This historic home is was built in 1939 and is listed on the National Register of Historic Places. Yeon designed and built a series of nine houses in this style between 1938 and 1940 in Lake Oswego and Portland. On this home, Yeon used external plywood with separate ventilation louvers, then placed fixed pane glass between vertical mullions. This design and the entire series earned him recognition as one of the prime originators of this NW regional style.

Another notable Yeon creation is the Aubrey R. Watzek House, located on SW Skyline Blvd. in Portland. Built between 1936-1937, this National Historic Landmark, designated so in 2011, is now part of the University of Oregon’s John Yeon Center for Architecture.

The property has expansive north, east, and south views, including views of Mt. Hood. As with many homes in this style, the entrance is understated, then opens to a courtyard with a garden space and small pool, followed by a narrow hallway that reveals the rest of the interior.

Designed and built for lumber magnate, Aubrey Watzek who first rejected Yeon’s design, then ultimately accepted it after attempting to work with another architect, A.E. Doyle, the structure served as Watzek’s home from its completion in 1937 until he died in 1973.

Yeon bought the house after Watzek passed, then sold it the UO. It is now open for events, meetings, and tours.

Looking for a NW Contemporary Style Home in Portland?

If you love the vibe and aesthetic of this style of architecture, you’re in luck. Portland—especially NW and SW Portland—has much to offer in this realm. Find one that speaks to you, then get in touch with our top 1% buyer’s agents at 503-773-0000. Or let us help you find what you’re looking for. If you have one of these beauties you’d like to sell, our top 1% seller’s agents will provide the best service you’ll find in this current market. Call us at 503-714-1111 or chat with the bot on our site. We look forward to connecting with you!

Real Estate Deed Vs. Title, What is the Difference?