What is a Tudor Style Home in Portland? 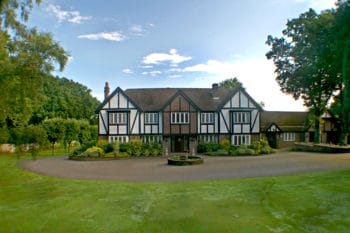 Portland is known for its eclectic style and personality, and that’s evident in the types of homes you see throughout the city. A person can track the city’s history by exploring Portland’s various neighborhoods and see how it has transformed over the years as a reaction to and reflection of the times.

From the first log cabin built in downtown Portland by Asa Lovejoy and Francis Pettygrove in 1843 to the Victorians, Italiantes, and Queen Annes that followed on up through the Victorian Farmhouses, Colonial Revivals, and Dutch Colonials, the Craftmans and Foursquares and Ranches, Portland has always adapted and evolved to reflect the trends of the culture and the needs of its residents.

While Portland continues to progress in all ways, including its architectural styles in new home construction, we wanted to focus on the Tudor style with its distinguished yet storybook charm. And we have the full list of all Tudor style homes for sale in Portland right here.

What are the Features of a Tudor Style Home?

The Tudor style home is fashioned after Medieval English architecture of the 1500s-1600s. You can spot a Tudor by its steeply pitched roof and rectangular or diamond-shaped (usually small) windows. You’ll may also notice features that reflect or mimick half-timber construction—timber frames with brick or stucco in between. Tudors often have multiple brick or stone chimneys that are often a focal point. Entrances to Tudors have a castle-like aesthetic with an arched top, either on the door itself or in a separate archway made of brick that contrasts the rest of the home’s facade.

If you’ve ever been inside a Tudor, you’ve experience the cozy interior. This style of architecture arose as a response to the industrial expansion and a growing populace during the time. People looked to home for comfort, a place to buffer themselves from the rapidly changing world around them.

Multiple fireplaces and lots of wood give Tudors their interior warmth. Rooms are sometimes on the small side, sometimes with low ceilings. Other interior features include Tudor arches in doorways, also called four-centered arches. These types of arches have a tighter radius than we typically see in plain arches and peak in the center, creating a look that conjures images of the old world cathedrals in Europe.

Where Did the Tudor Style Home Get its Name?

The period that sparked the Tudor style came during the time the Tudor family ruled the throne in England from 1485–1603.

When Did Tudor Style Homes Come to Portland?

The first Tudors in Portland were built in the early 1920s, a result of developer Richard F. Wassel’s vision. With the anticipation of the automobile, he wanted to create a village-style community on the outskirts of the city. Wassel introduced a variation on the Tudor theme by adding attached garages.

Where Can You Find Tudor Style Homes in Portland?

One of the best-known Tudor neighborhoods in Portland is Peacock Lane. Whether you visit this four-block lane in SE Portland for its annual Christmas light display—what it’s most known for—or any other time of year, these lovely homes are bound to impact you with their character and ambience. In 2018, Peacock Lane was granted a historical neighborhood designation, which means that these homes cannot be demolished or altered (within certain criteria).

With this in mind, if you’ve fallen in love with the idea of owning a Tudor yourself, be sure you’re in the know about restrictions before you buy in a historical neighborhood or if your neighborhood gains this designation after you own.

Looking for a Tudor Style Home?

Curious about Tudors for sale in Portland? Our team of  top 1% sellers agents would love to show you these and any other style of home you’re looking for.