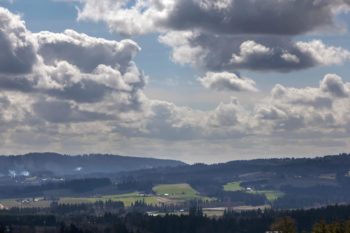 Once you cross over the western boundary of Beaverton, you’ll find yourself in a quiet but well-developed area called Aloha. Yes, like the Hawaiian word used as a greeting and as a signifier of peace and unity. (But also… not like that, as you’ll learn below.) Pronounced a-LOH-ah, this little suburb still lives up to its name, though. Remarkable because of its community engagement and natural beauty, Aloha makes an excellent place to settle down and make a home. Keep reading to learn 5 things you perhaps didn’t know about Aloha, Oregon.

Full honesty, the history of how Aloha got its name is a little murky and contested. But the best guess anyone has is that the name originated from the first post office, which was founded in 1912. Some say a railroad man by the name of John Caples chose the name, but this claim was contested in 1983 when Joseph H. Buck asserted that his uncle, the first postmaster, had named the town. According to Buck, his uncle named the town after a resort on Lake Winnebago in Wisconsin, Aloah. This would mean the name was derived from an American Indian word, rather than a Hawaiian one.

So how did we end up with Aloha? The lore passed down from Buck argues that during the application process that established the post office, the last two letters of the name got transposed. So, we can joke all we want about how people mispronounce this commonly known Hawaiian word. But really it’s more likely that we’ve just been spelling it wrong all along!

#2 – Aloha Is One of Portland’s Most Diverse Suburbs

True to its (albeit mysterious) name, Aloha has established itself as one of the most racially diverse suburbs in the Portland area. It currently ranks 7th on Niche.com, after other areas such as Hillsboro. The United States Census Bureau’s latest estimates are for 2019. According to those estimates, Aloha’s Asian and Latino populations are strong parts of the community (coming in at 10.2% and 21.6% respectively).

#3 – No, Aloha Is Not Technically Part of Beaverton

When you hear folks talking about Aloha, it can seem like it’s just a neighborhood in Beaverton. There’s some truth to this, for sure. Aloha’s eastern boundary sits just blocks from the Nike company store, and downtown Beaverton isn’t much further away.

However, Aloha is technically an unincorporated section of Washington County. That means while they don’t have their own independent governance, they still receive services from the surrounding area. For example, Tualitin provides fire and EMS services. Both Beaverton and Hillsboro serve Aloha for public schools. So while there are some bureaucratic distinctions, in terms of community, living in Aloha means Beaverton – our top suburb of 2021 – is home too.

One thing you’ll notice pretty quickly if you spend any time there is that Aloha is chock full of parks. Little nooks here and there make sure everyone has access to green space. Plus you can’t beat the names – this little corner of the world has some of the most charmingly named parks on earth. In Barsotti and Melilah parks, you’ll find fantastic play structures for young kids. Butternut Park will satisfy anyone who wants a little creek-side view of ducks and other waterfowl. Mountain View Champions Park provides top class sporting fields. And to the south Cooper Mountain‘s three miles of hiking trails and native plants await your adventures.

Not so much of an outdoor person? Stay in and cozy up with a cozy book from Aloha’s Community Library. This nonprofit library staffed by volunteers opened its doors in 2012 and has been serving the area ever since. Additionally, it puts a good amount of emphasis on multi-lingual learning and reading.

Lastly, we’ll throw in this oddity for your reading pleasure. Just like Milwaukie, Aloha retains some of Portland’s zaniness despite being a suburb. Harvey the Rabbit is a roadside attraction in Aloha, supposedly an orphaned fiberglass statue that found a home outside of the Harvey Marine boat repair shop. The owner, Edgar Harvey, took a liking to the 2,500 pound bunny because of the movie Harvey, in which Jimmy Stewart developed a relationship with a six foot tall imaginary rabbit.

Now you can find it waving to you on the side of the road. Reviews of this public art installation range from creepy to endearing, and everywhere in between. So take a drive down SW Tualatin Highway to judge for yourself, and to wave to Harvey!

Find a Home in Aloha, Oregon

Anything you read here pique your curiosity? The best way to find out if Aloha is the place for your next home is to go check it out in person. Our experienced real estate agents can help guide you to find the best homes for sale in Aloha today. Contact our top 1% buyers’ agents to get your home search going!