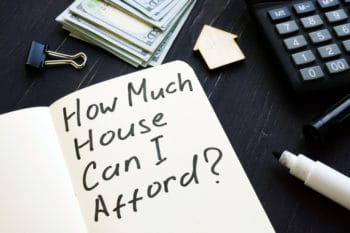 We recently wrote about Oregon’s growing population, with many of its migrants being Californians looking for more affordable housing. While this may come as a surprise to Portlanders who have faced increasing rents and home prices, Portland is still more affordable than many west coast cities.

But what about those who have lived in the Portland metro area for years? How is the city’s level of affordability affecting them? And how does Portland’s affordability stack up against other cities in the country?

We looked into it all and here’s what we found.

What is Portland’s Affordability Rate in 2022?

RMLS provides a quarterly affordability chart for the Portland metro area. They use the NAR formula for housing affordability:

REALTORS®. The formula assumes that the buyer has a 20% down payment and a 30 year

According to their charts at the end of December 21, a household earning the areas median income, $96,909 as reported by HUD, can afford 116% of a monthly mortgage on a median priced home in the Portland real estate market, $511,000 in December.

According to the latest 2022 RMLS report, that has median sales price has already increased to $519,100 entering March of this year.

Portland Wages Are Increasing Too

Wages are not expected to rise as fast as housing prices in Portland. It is a race (along with inflation) that local Portland wages will lose, at least in the short term. This means we expect Portland housing affordability rates to drop in the coming years.

Portland, Oregon is an affordable city compared to other metropolitan cities on the west coast, but doesn’t compare favorably against the rest of the country as a whole.

The chart below shows where Portland falls in comparison to other cities across the country.

As we can see, the overall cost of living in Portland is 29% higher than elsewhere. And housing beats all the categories at 79%.

The City of Portland shows the population to be 639,387 at the end of 2020, making it “the 26th most populous city in the United States and the sixth largest city on the West Coast,” despite the slowing of the area’s population growth. The Residential Infill Project (RIP) was a major local zoning change to increase density and provide more housing opportunities, but despite the change new construction rates in Portland are at a near all-time low. Time will tell how it all balances out.

The graph below shows a more current number for Portland’s 2022 population.
Read more about Portland’s population growth in 2022.

This all sounds good, right? It’s too soon to tell, but we can look to the current market for indicators in both Portland’s rental and real estate markets.

How Does Portland’s Rental Market Look?

We all know that owning a home is far better than renting for a person’s financial future. But what about those who don’t have the income to qualify for a mortgage or to save enough for a down payment? Read our recent article about down payment assistance programs.

According to rentcafe.com, 48% of the households in Portland are renter-occupied while 51% are owner-occupied. If incomes are, indeed, increasing in Oregon, it would provide a glimmer of hope. However, rents in Portland are also rising, and rapidly.

When we compare Portland’s rising rents to those across the country, some as much as 40%, it appears that Portland is becoming a city less open to those in lower income brackets.

Portland does has several options for those who need affordable housing, though. And developers in Portland proper are striving to create even more, with several multi-unit complexes in the works. Click the image below to view the interactive Portland development map for all planned affordable housing projects.

We can only hope that once available, complex owners in Portland don’t follow the path of some in Tigard, Portland’s nearby suburb. In June, 2021 OPB reported that the city of Tigard was poised to lose one-fifth of its affordable housing.

One saving grace for renters in Portland may be the new maximum rent increase of 9.9% for Oregon in 2022.

As reported in our most recent Portland real estate market update, real estate prices are still increasing and inventory has dramatically dropped, even from the previous year.

The bottom line right now is that we’re still in a very strong seller’s market with low inventory and still-rising prices.

Any Portland Real Estate Plans in 2022?

We can help. With our almost 20 years of professional experience in the Portland metro area, our top 1% buyers team and our top 1% seller’s team can help you navigate the current unprecedented market. Call us direct at 503-714-1111 or chat with the bot on our site today.

What is a Bungalow Style Home in Portland?